A map depicting the local area as it was in 1764 at the time of the Enclosure Acts shows a road, or track, running parallel to the coastline at a little over a kilometre to the east of the village of Skipsea. The scale of the map suggests about 370 metres separate the track from the edge of the cliff. 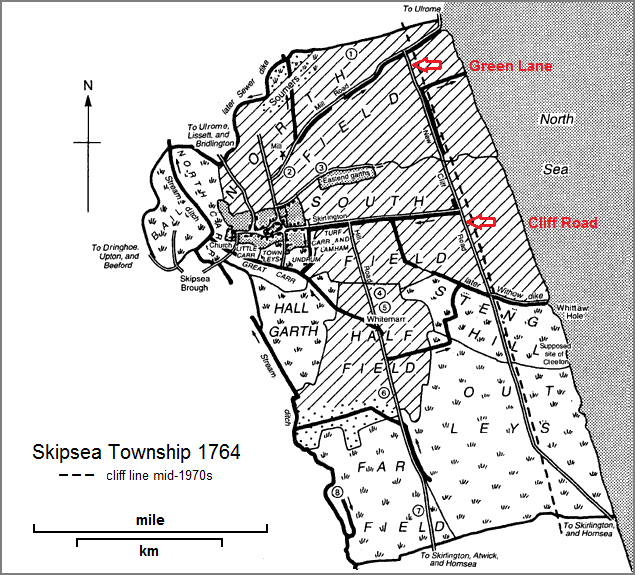 Some 250 years later, coastal erosion has overtaken the road. Vestiges of the southern part, known as Cliff Road, are shown on the Skipsea Withow page. The last of the northern section, named Green Lane, can be seen at Skipsea.

During the 1980s, a number of bungalows were built along the western side of Green Lane with imposing views of the sea beyond Tranmere Cliff. Ideal as holiday homes, the properties may also have appeared attractive as places to live out retirement. However, for some buyers the length of tenure would seem to have proved shorter than expected.

Media attention is regularly drawn to the Green Lane community, members of which face domestic relocation, loss of an asset, and the cost of enforced demolition (though grants may be applied for). The following content looks at the situation from the point of view of cliff loss information. 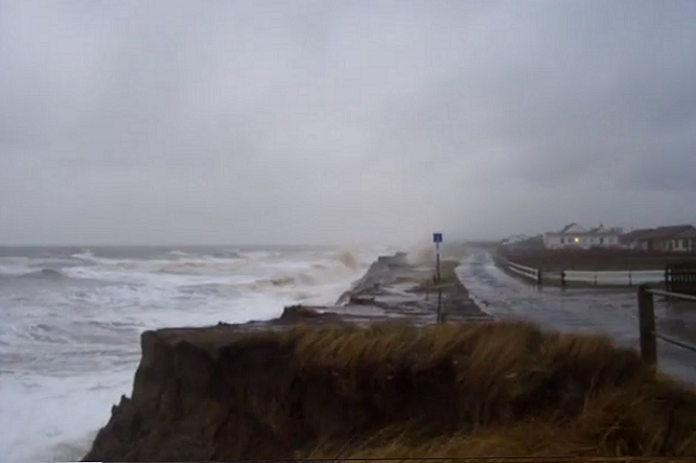 Stormy weather sends spray over Green Lane, 2007 [from a video by Dave Hunt].

what could have been known in 1985

Green Lane is well served in terms of erosion measurement. Two essentially separate sources are described here, and another noted.

1. In 1952, Hartmut Valentin conducted what may be regarded as the first detailed survey of cliff recession. Observations were taken at approximately 200-metre intervals along the entire coast. From the measurements, calculations were made of land loss caused by a hundred years of erosion between 1852 and 1952. One of the observation points was opposite Green Lane.

The results of the survey were originally published in a journal in 1954 and again in 1971, as one of a collection of papers presented in textbook form. Valentin estimated an average annual recession rate of 1.65 metres for the relevant cliff.

Although the current line was installed in 2003, when systematic monitoring of the full coast started, the profile lies close to a location of an earlier erosion post, introduced in 1951. (See data in detail for information on erosion measurement.)

In 1985, a line from the erosion post could have been projected over early Ordnance Survey maps in the same manner as is applied to the modern monitoring profile for the purposes of estimating past cliff recession. Results for profile number 25 are shown in the following table (values in metres).

date of OS map
(years between)

Calculation of cliff loss from maps has limitations but averages taken over periods of time may be considered as close as is likely to be achieved, certainly in the historical context. Overall, an annual average for the 122 years covered by the table would be 1.77 metres.

Bungalows situated at or near the monitoring profile share a common building line. By reckoning, in 1985 the cliff line would have been 57 metres, or 187 feet, from the front of the homes across gardens stretching 25 to 30 metres (Green Lane had a slight curve), a surfaced roadway, and an area of green.

Consulting the information available at the time, an adoption of the Valentin rate would suggest a tenure expectancy of 34½ years before the cliff reached the front door, in 2019.

A favouring of Ordnance Survey cartography would shorten the expectancy to 32 years and a couple of months, allowing tenure until 2017.

The Commission’s rate, locationally and metrically less specific, would give the properties a touch over 31 years, to 2016. 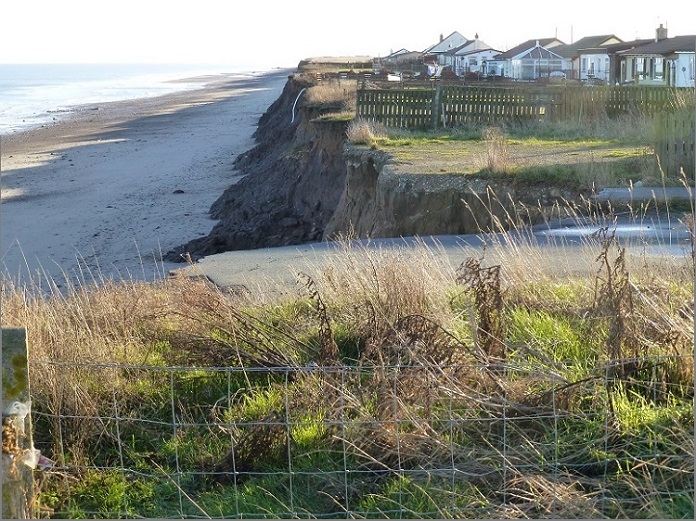 The roadway is gone and the cliff line advances up the gardens [4 December 2013].

According to measurement along Profile 25, by November 2014 the cliff line had receded 38.84 metres since 1985. Averaged over the 28½ years, an annual rate is 1.36 metres. This is less than all the estimates calculated from information available in 1985. A continuation at the same rate would put the cliff at the building line of the bungalows by late 2027.

The cyclic nature of East Yorkshire coastal erosion is associated with the movement, or migration, of hotspots. In the case of Green Lane, it is possible for erosion to have been influenced by the terminal groyne effect produced by private sea defences positioned updrift of the locality.

An erosion event, when some metres are lost over a short period of time, is sure to cause alarm and distress among residents whose homes are only a small distance from the cliff.

On the other hand, a sense of inevitability prevails when a coast has been receding for thousands of years (see some basics, erosion map). Any notion of permanence has to be treated as relative.

Cliff loss information was available in 1985 from which to form estimates of tenure expectancy. Even though the reality has delivered less recession than might have been forecast in 1985, Green Lane was never certain to offer the 45, 50, 60, or 70 years of tenure that residents say they were led to look forward to.

Arrows in yellow show estimates of cliff line position at 45 years from the perspective of 1985, using information available at the time.

The thicker horizontal line represents monitoring profile no. 25, close to a former erosion post. Rates of recession could be calculated from Ordnance Survey maps.

Landward projection from an observation point of the survey by Valentin is traced by the thinner horizontal line. The right margin of the image may be considered the position of the cliff line in 1952, year of the survey.

Both estimates place the cliff line inland of the bungalows.

Although the actual rate of cliff loss has been less, tenure is unlikely to achieve 45 years from 1985 (white arrows).

Visible behind the Green Lane bungalows is a small section of South Field, part of the extensive Skipsea Sands Holiday Park.