There can be no definitive answer to the question, ‘what was England’s population in [such and such a period]?’. Even with the sophisticated data gathering and processing techniques used in compiling the modern Census, not every individual is counted, and a few assumptions have to be made. When the question is applied to earlier centuries, a degree of intelligent guesswork is called for.

Although England is famously blessed with a generous source of historical records, the information is not sufficient to provide a complete picture. However, a profile or ‘shape’ to England’s population history is certainly possible, one that may be regarded as reliable. The main chart of this page shows a profile based on the combined output of three different approaches.

The safest way of dealing with late medieval populations is to work within a range. For example, John Hatcher (1977) offers high and low estimates that run from the beginning of the twelfth century into the sixteenth. Estimates by other researchers of the same period tend to fall within this range, or not far outside.

Taking the story from Tudor to Victorian times, Anthony Wrigley and Roger Schofield (1989) supply a detailed set of tables produced by a method of calculation called back projection. Systematic regular counting of actual people started in 1801. The official national Census provides a decadal count which brings the chart to the present day. 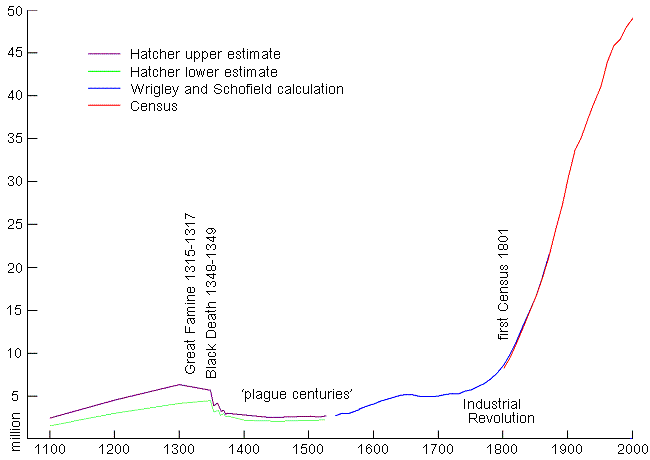 The period from 1348 (the Black Death) to 1665 (the Great Plague) could be termed the plague centuries, although other diseases were also responsible for mortality. During this part of England’s history, the population must have intermittently dropped, to recover a little, only to fall once again as another epidemic flared. A total of thirty-three widespread outbreaks of plague have been identified for the period.

By entering into a computer model some values for natural growth (as it might be without plague but having regard for the action of other diseases), exposure to the disease, case fatality, plague type, immunological protection, and by stipulating that the trace be faithful to the paths proposed in the main chart, a speculative ‘saw tooth’ profile for the plague centuries is formed. As plague disappeared in the second half of the seventeenth century, other factors caused several decades of population stagnation. 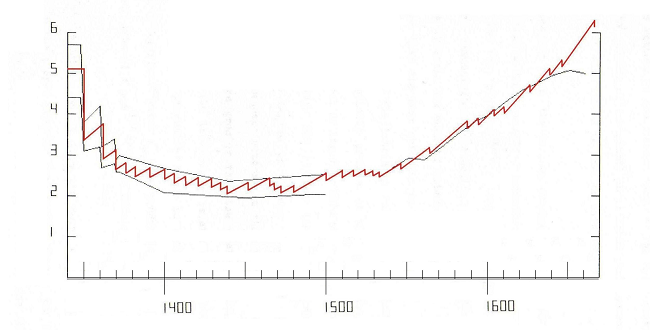 Charts devised by Brian Williams in 1996 as part of ‘The Cycles of Plague’, dissertation for a BA (Hons) degree at the University of Hull, England.