Ringbrough, or Ringborough, (Ringheborg in Domesday) is the name of a community lost to the sea. Certainly by the early nineteenth century all that remained was a farm.

During the Second World War, the farm was chosen for the construction of an artillery battery. In recent decades, almost the entire military installation, including a brick-built observation tower, has succumbed to coastal erosion.

The land at Ringbrough is private property. 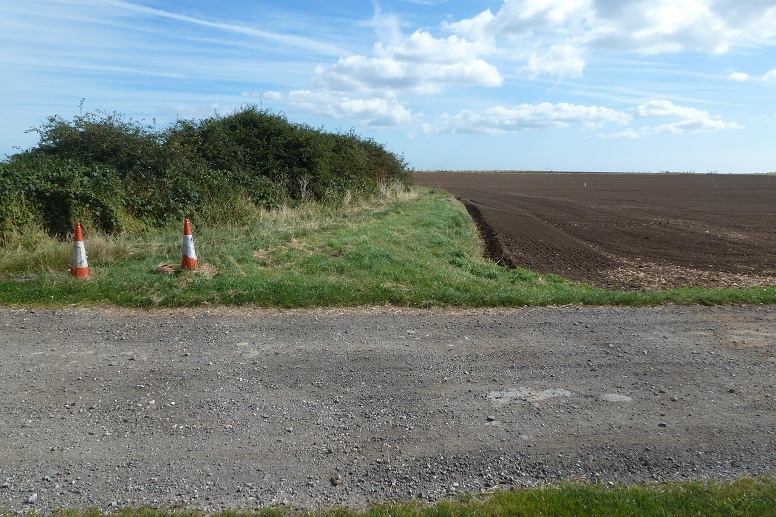 Traffic cones mark the former road to Ringbrough from East Newton, south of Aldbrough. Before being lost to the sea, the road turned right to Ringbrough beyond the present cliff line, which lies about 200 metres across the field [17/09/12]. 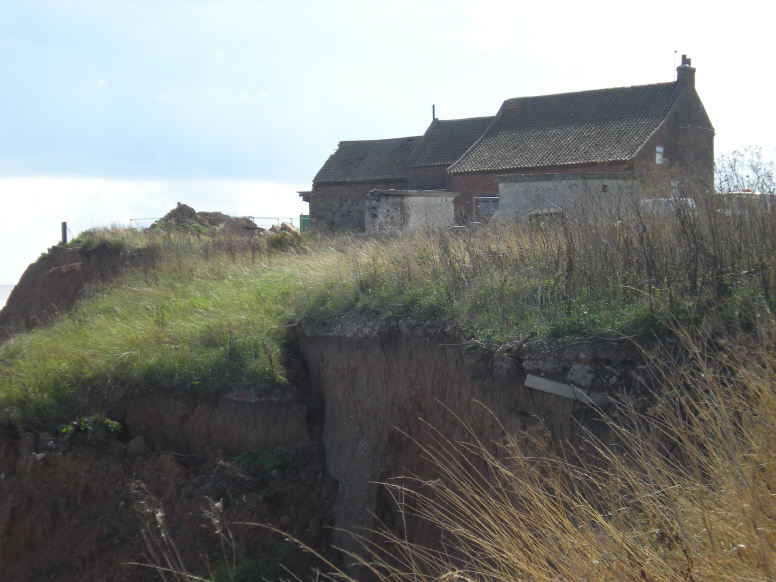 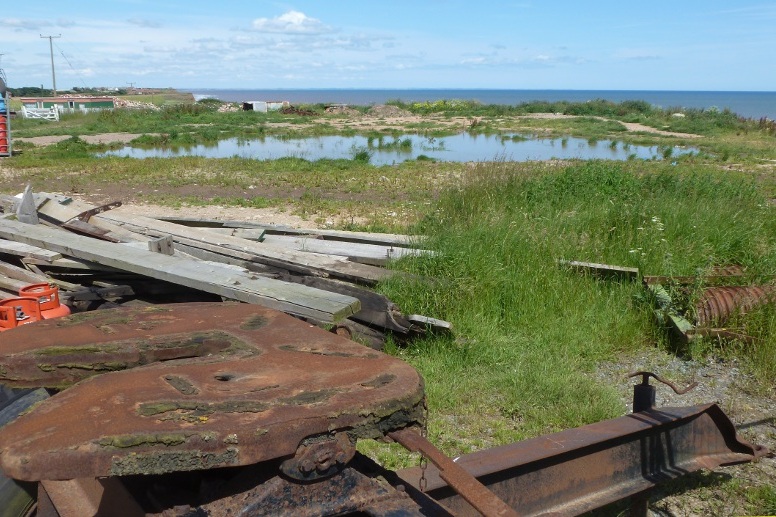 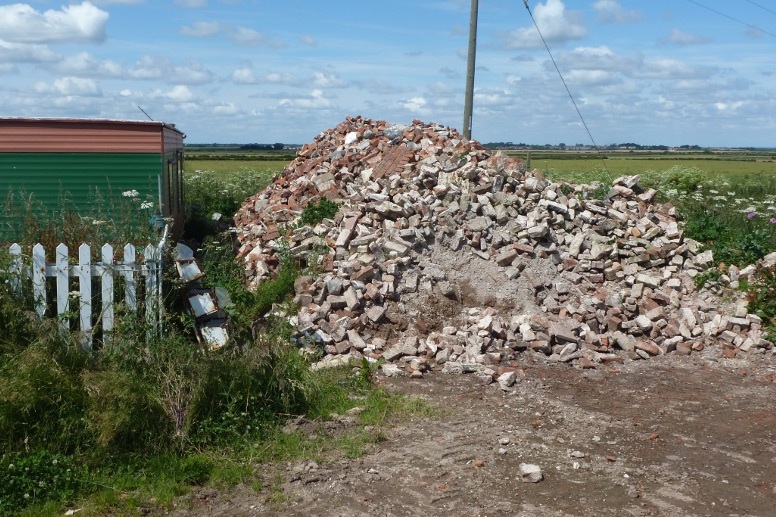 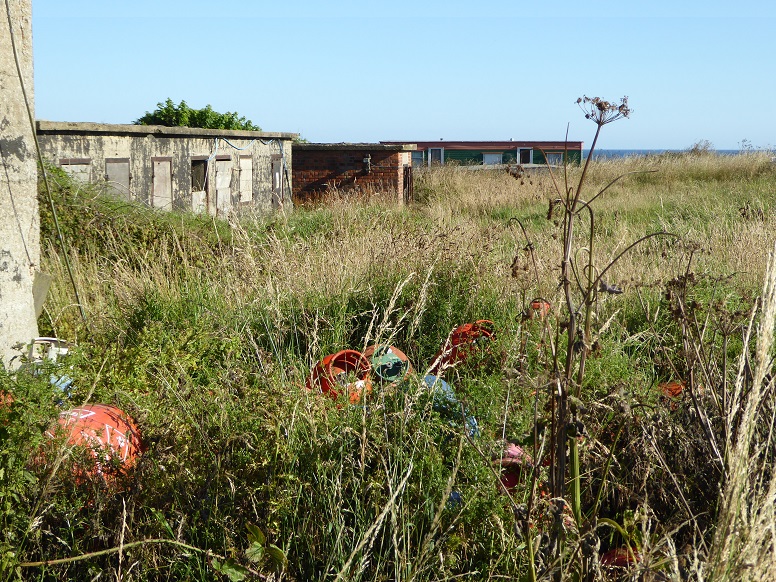 Below is a sketch map depicting the layout of Ringbrough Farm and Battery during the Second World War. 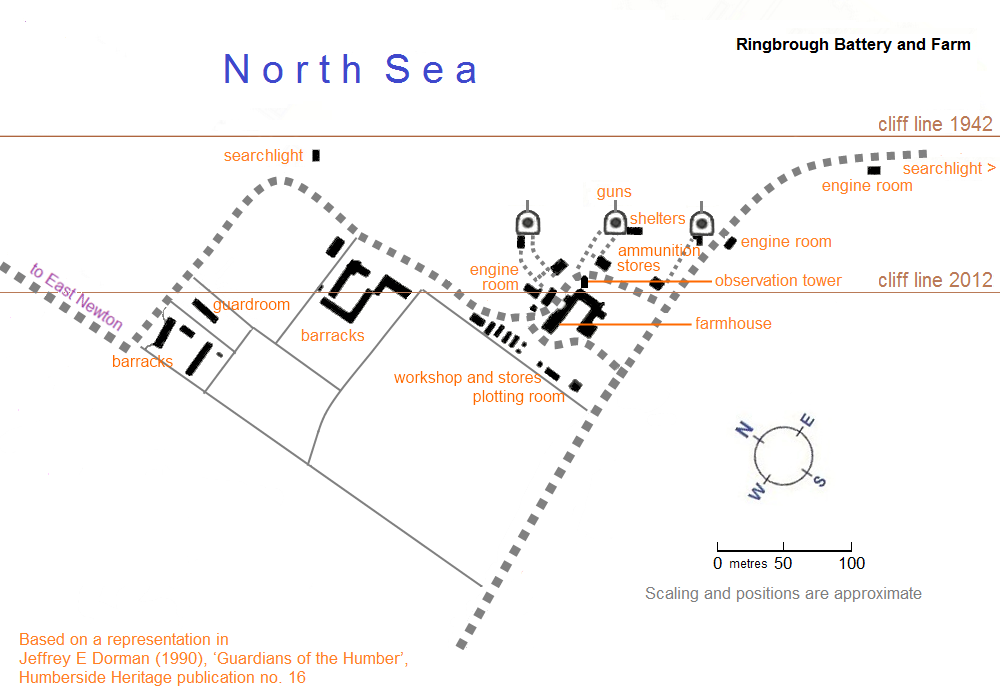 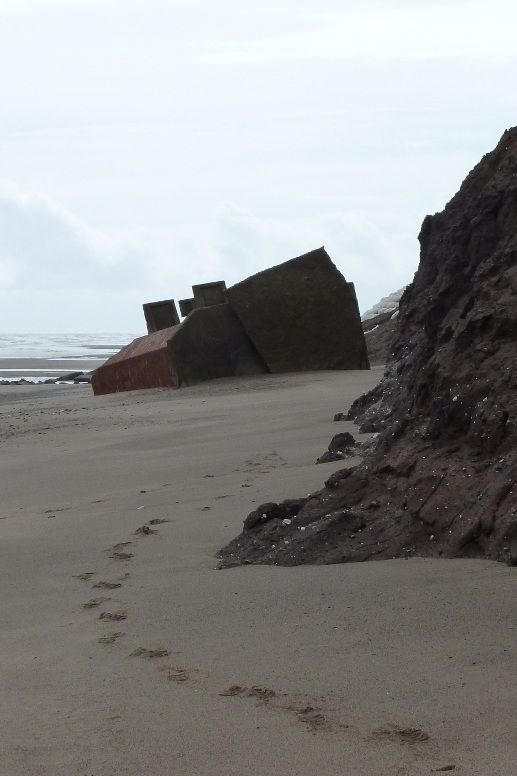 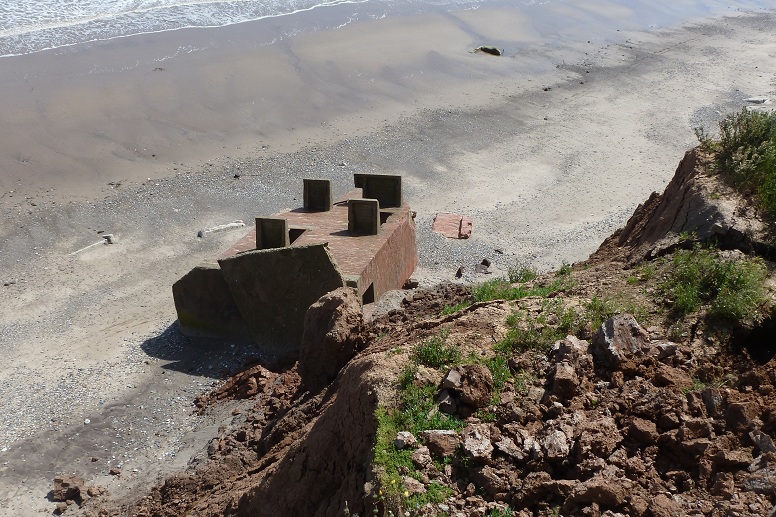 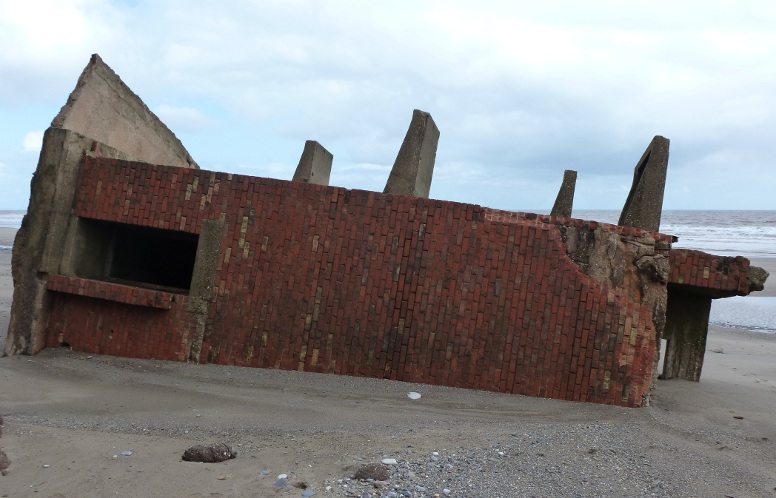 Lying on one side, partly in the sand, the tower is denied a sense of former bearing. In the manipulated image below, the structure has been righted and background removed. The proportions remain the same [05/05/12]. 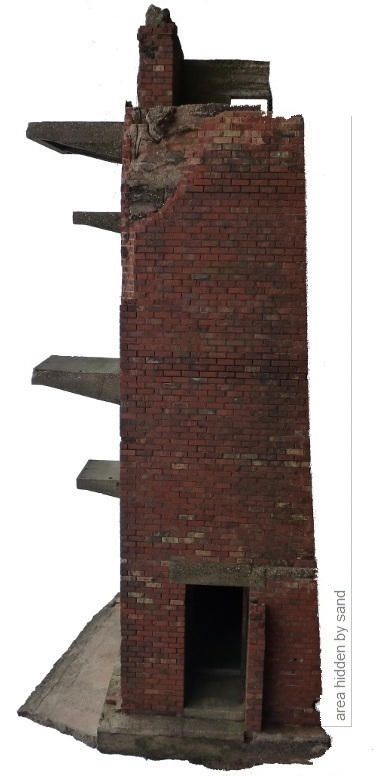 at the edge
Geograph / Geograph
Paul Glazzard, 11th May 2007

on the way down
UK Fossils Network
Tabfish 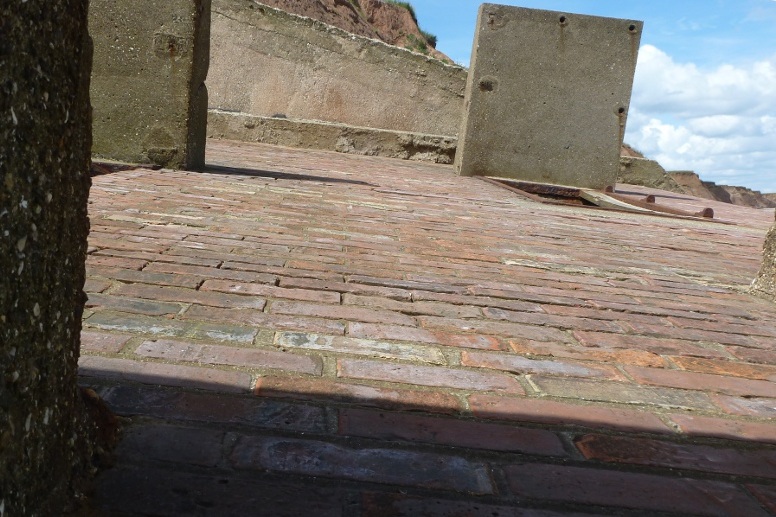 All along the watchtower. The concrete look-out platforms, seen here from ‘above’, would have been fitted with metal hand-rails [15/07/12]. 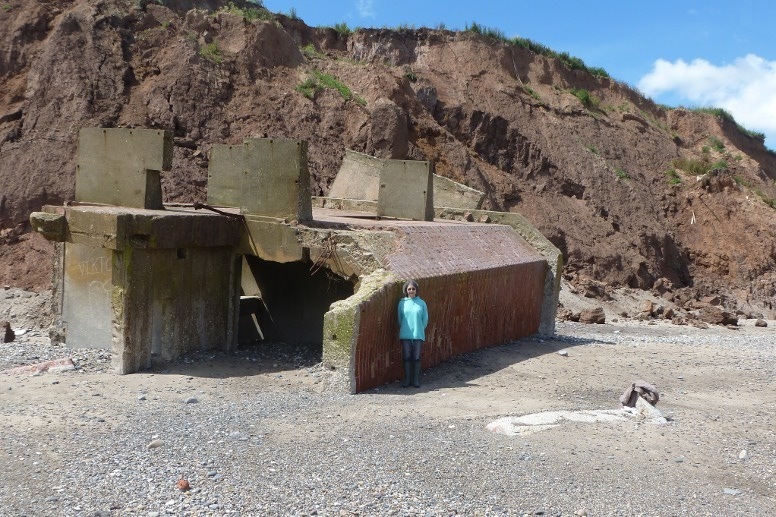 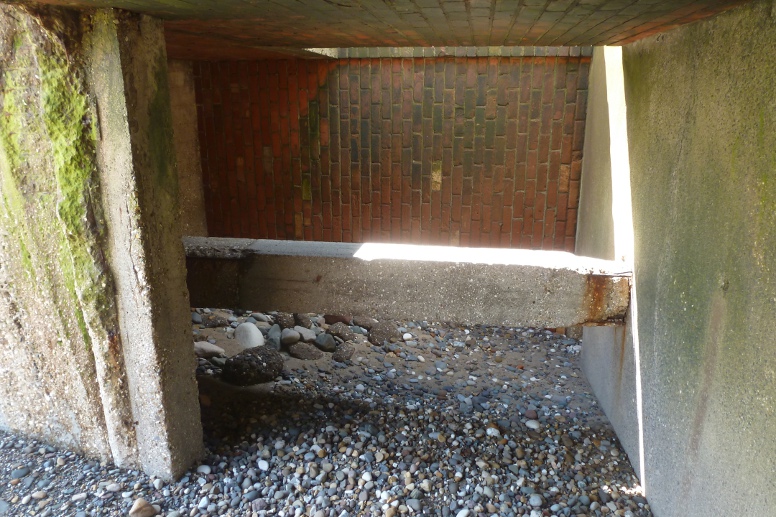 Inside the upper section. The floor is on the right. A hatchway just visible at the far bottom right of the compartment as shown allows all-fours access to other sections [15/07/12]. 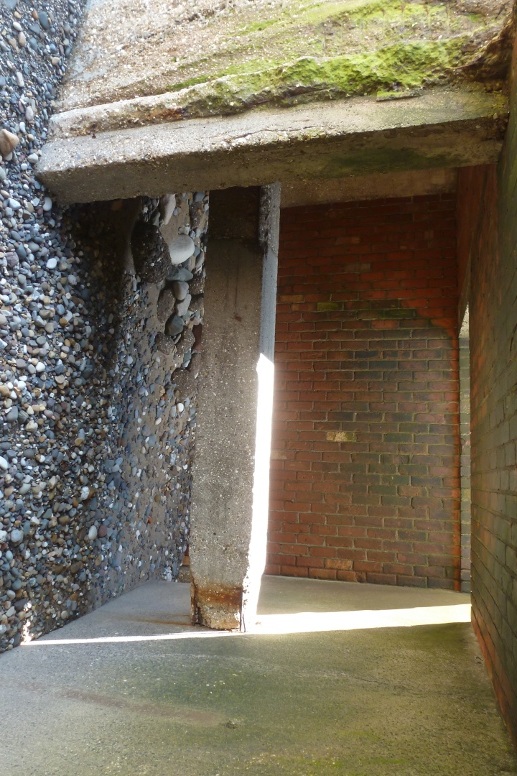 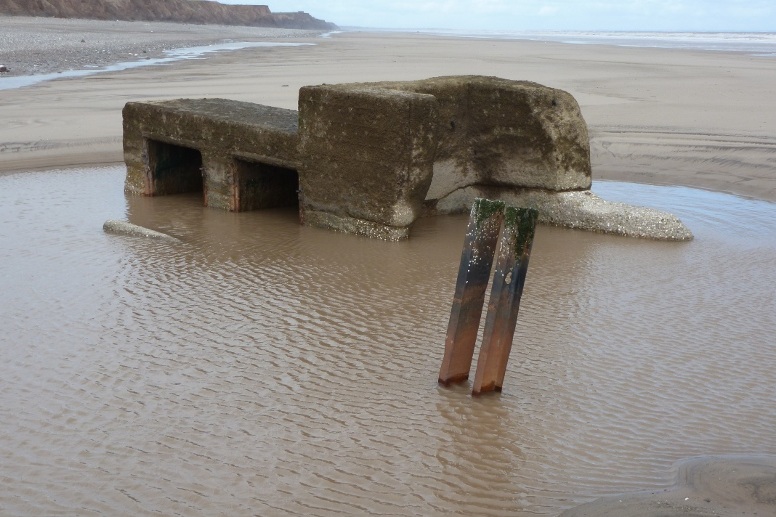 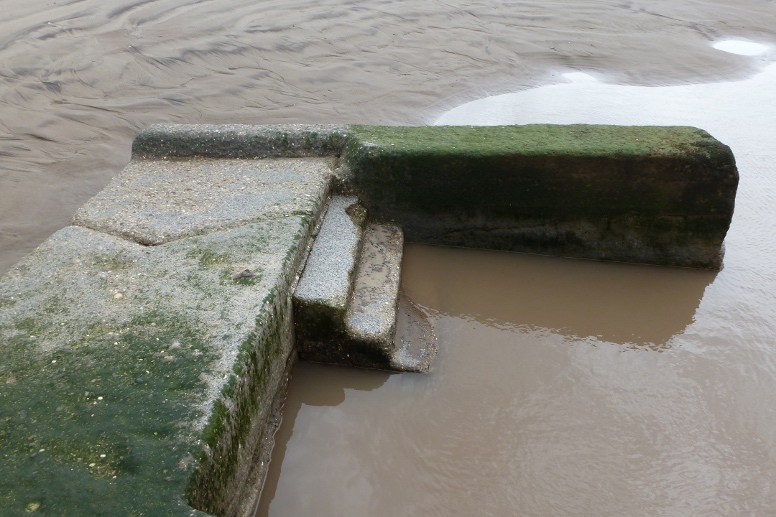 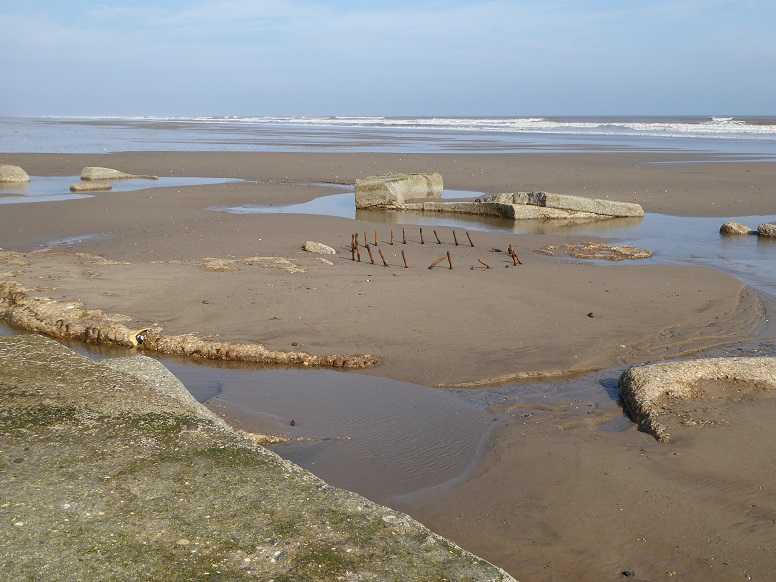 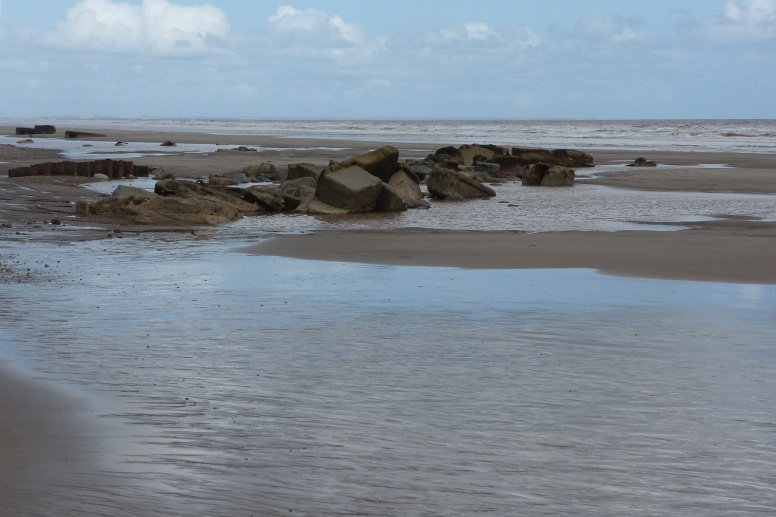 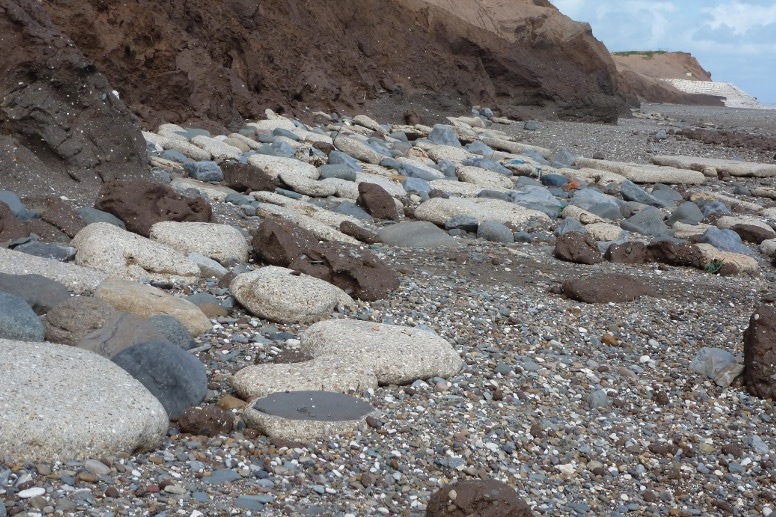 Like the medieval community before it, Ringbrough Battery is fallen to destruction and inevitable disappearance. In the case of the military defences, solid angular sections become wave-rounded blocks, are then reduced to stones and pebbles (washed south by longshore drift), and eventually erode to grains [05/05/12]. 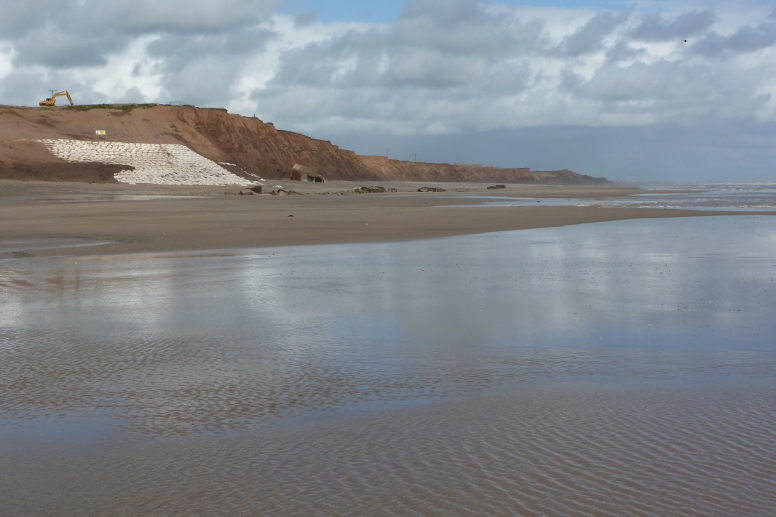 View of the Ringbrough site from the lower beach. The tower is left of centre below the cliffs [05/05/12]. 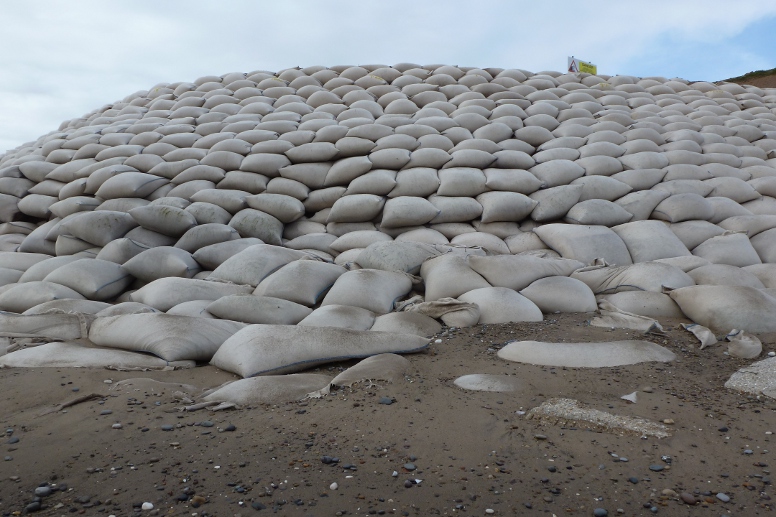 This somewhat surreal sight of a bank of sandbags on the sand affords temporary cliff toe protection for the Aldbrough gas storage project [05/05/12]. 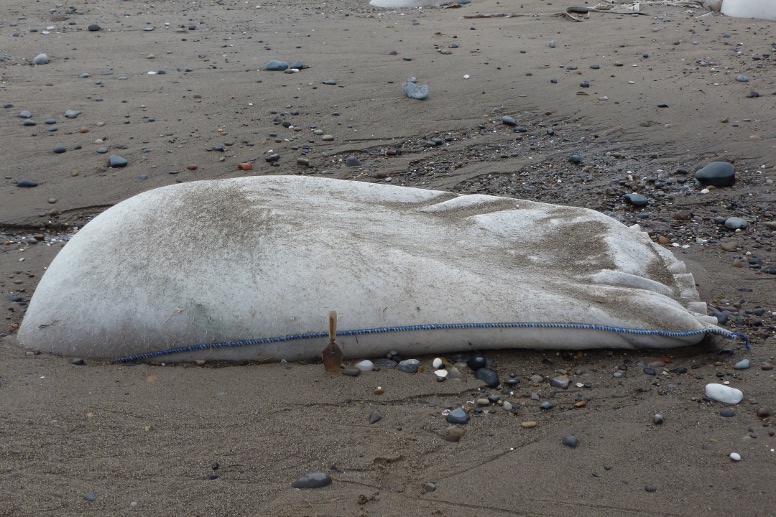 The sandbags were later removed as part of the project’s programme. 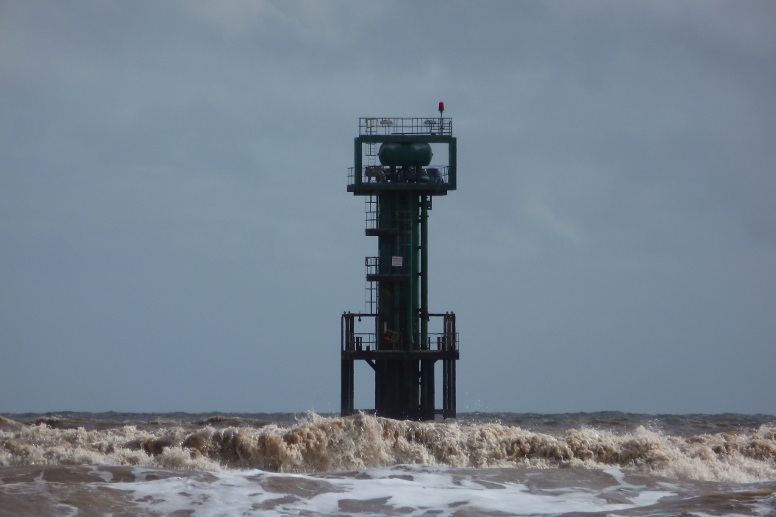 A more recent type of tower now locates Ringbrough. Erected 700 metres out to sea, this one was used for taking in water to leach caverns within salt-bearing strata some 2000 metres beneath the surface, ready for the storage of gas. It is expected to be dismantled at some future date [05/05/12]. 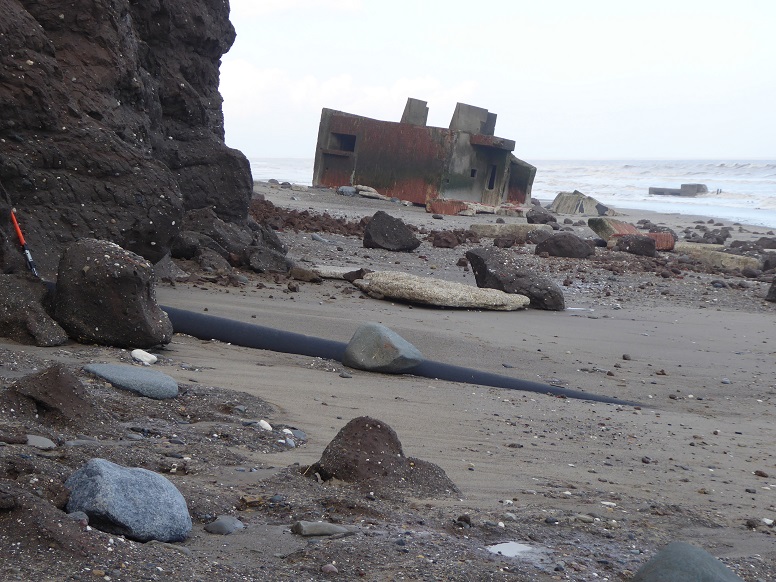 Pipes from the leaching tower may be exposed during a reduction in beach level [29/03/18]. 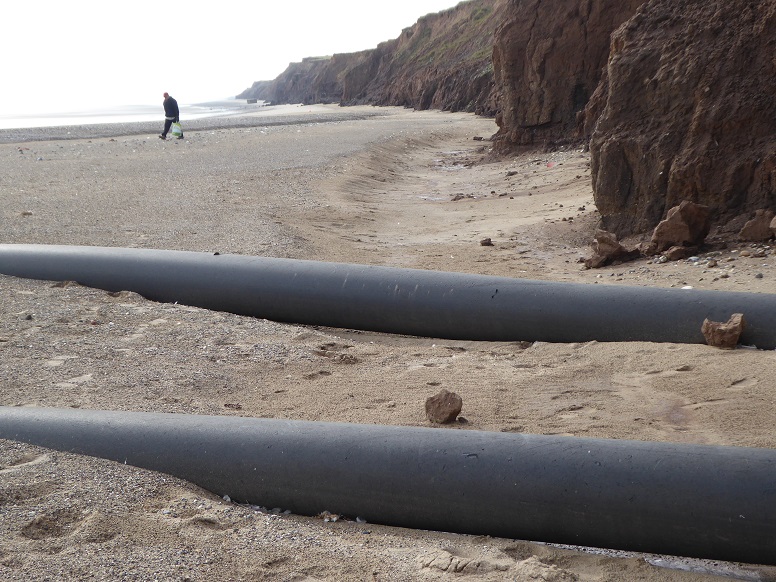 The pipes from the leaching tower are no longer used and are empty. Originally, the plan was to remove them after service but to do so could exacerbate cliff erosion and, at least for the present, they are to be left. 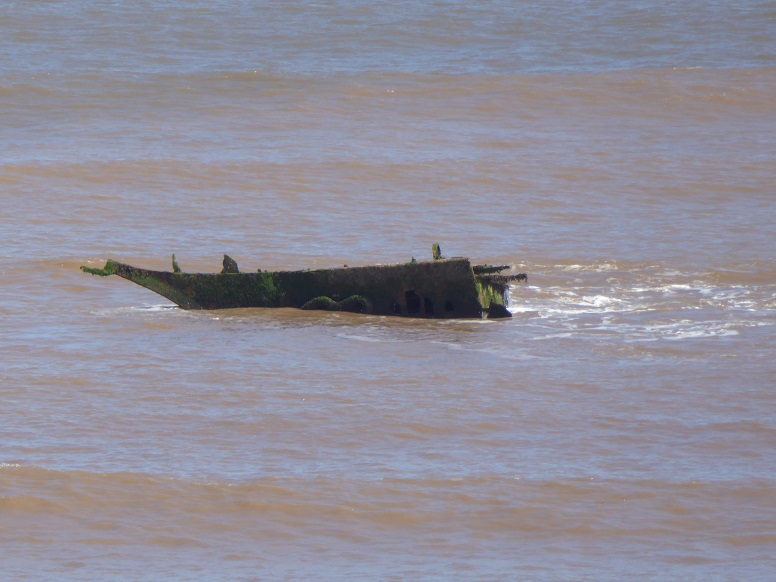 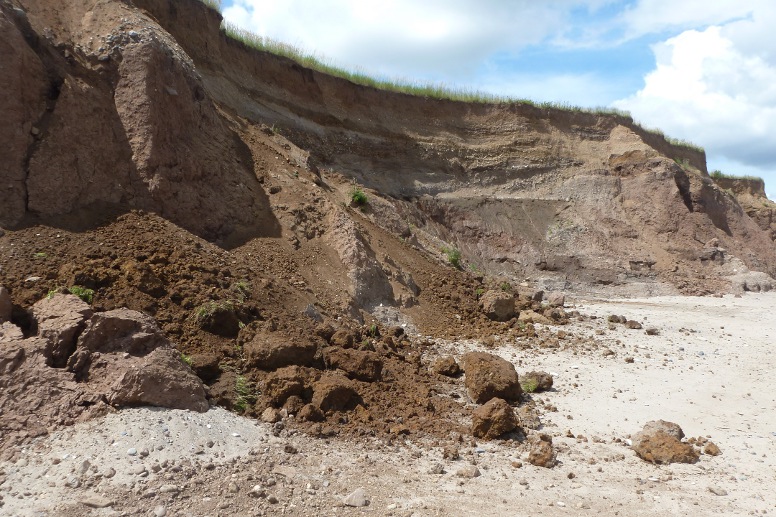 Cliffs north of Ringbrough contain sands and gravels deposited in a series of outwash channels during glacial retreat. The small fall in the foreground occurred moments before the picture was taken [15/07/12]. 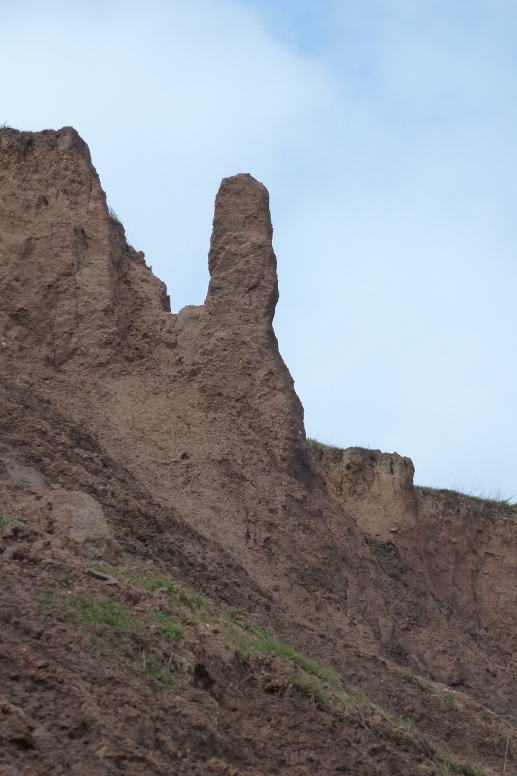 The land may make a defiant gesture to the sea but, in the battle of coastal erosion, the waves will always win [05/05/12].