One of the most recent places to be lost to cliff erosion on the East Yorkshire coast is Great Colden. Listed as ‘Coledun’ in Domesday Book, a name possibly meaning charcoal hill, the village possessed a church until it succumbed to the sea around 1690. Latterly, the remaining hamlet was referred to as Great Cowden, or simply Cowden.

The settlement followed a north-south alignment, originally with worked fields either side. At the middle of the nineteenth century, the cliff edge was nearing the northern end of the main street. Whatever properties still existed by the Second World War were demolished to make way for an army tank range, with the community relocating inland. 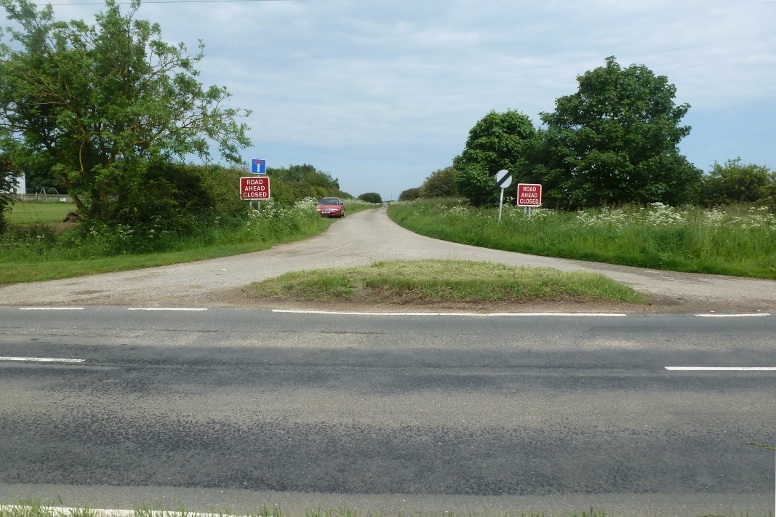 The lane that once led to Great Colden leaves the B1242 between Mappleton (south of Hornsea) and Aldbrough [10/06/12]. 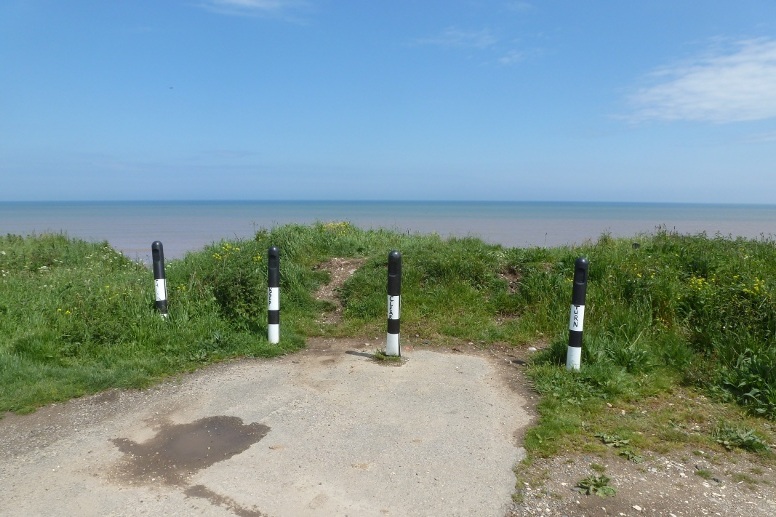 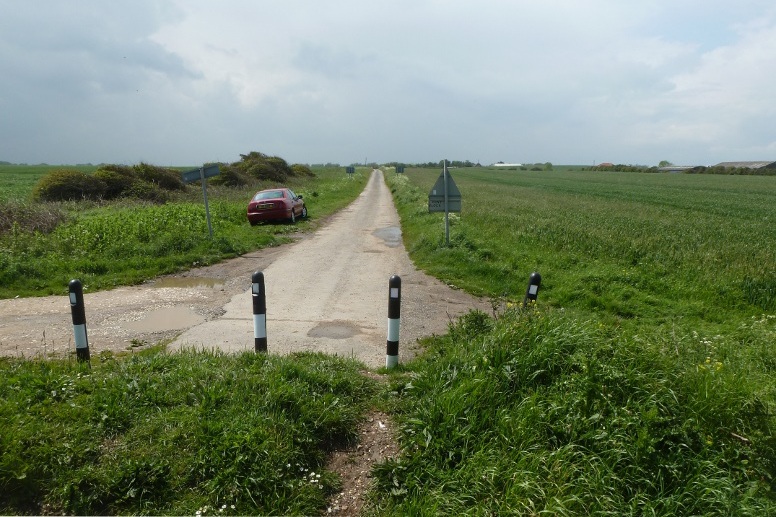 The sketch map offers an idea of the former community’s layout. Land height was some 18 metres above the pictured beach. Distance from the viewpoint reference arrow to the crossroads at the centre would be about 150 metres. 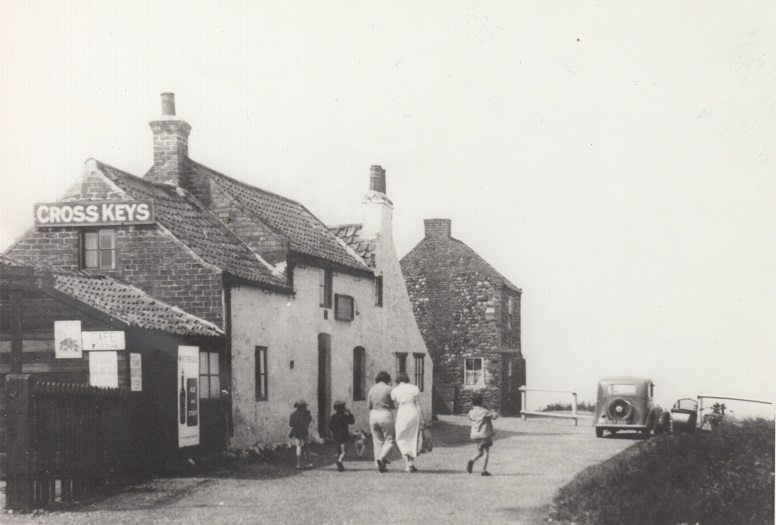 The Cross Keys, a public house since at least 1822, with the cliff getting close. No source or precise date is available for this photograph though the suggestion is the late 1930s. 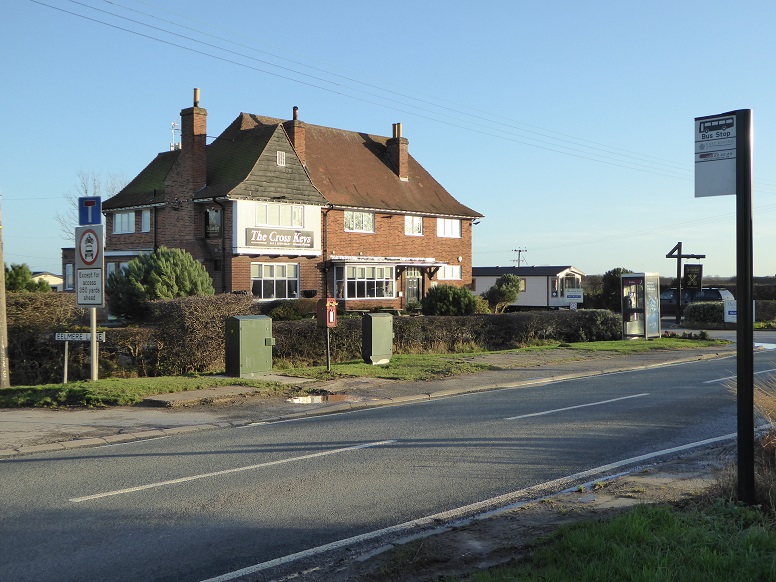 Present day Cowden, with a replacement Cross Keys (built 1943, in recent times called the Blue Boar but now once more bearing the original name), and with Cowden Holiday Park as neighbour, is located on the B1242 at Eelmere Lane [23/12/15]. 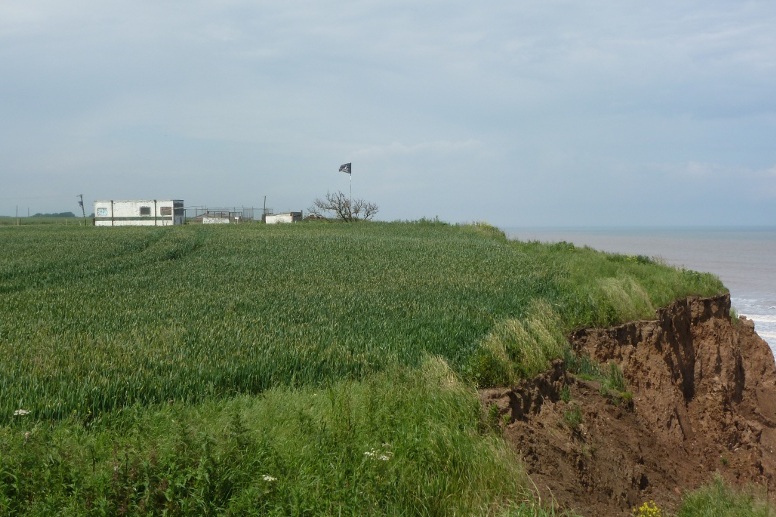 Across a field from the end of Garthends Lane a Jolly Roger flutters at the edge of the cliff [10/06/12]. 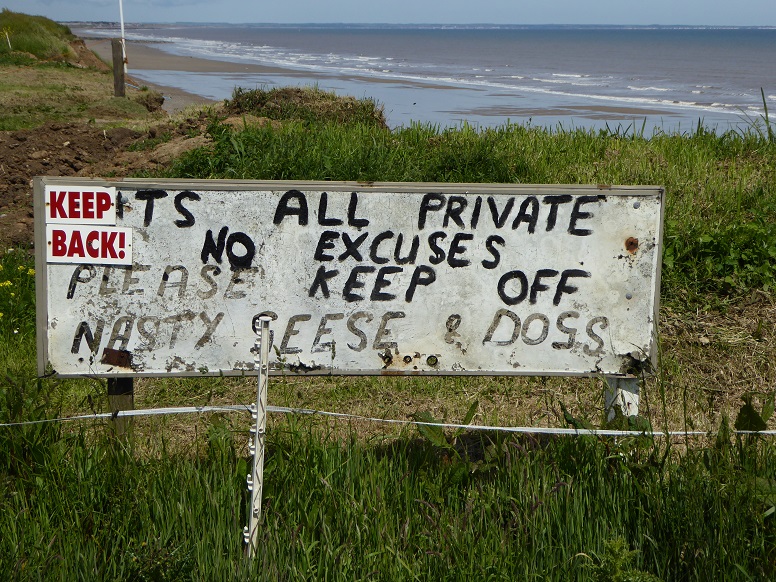 Public right of way as the cliff recedes into private land should not be assumed – see the notice at Skipsea Withow [15/06/15]. 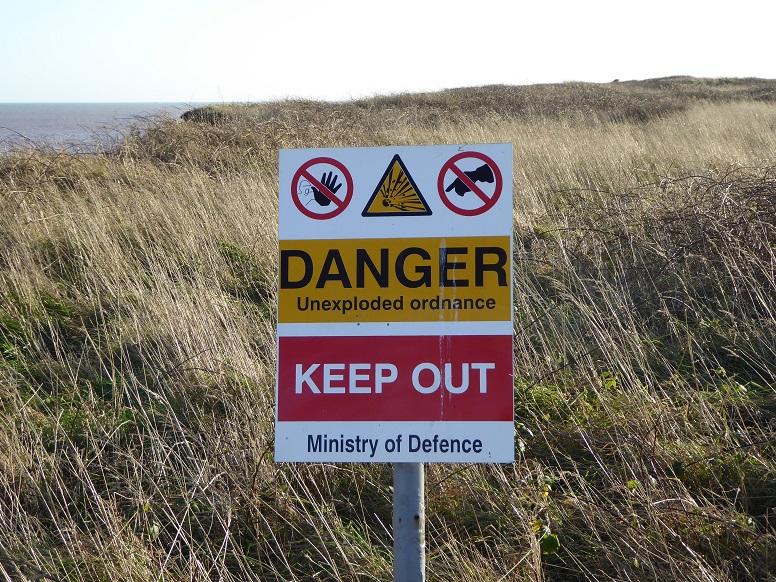 Beyond a field in the opposite direction an overgrown disused military firing range also thwarts cliff access [29/12/15]. 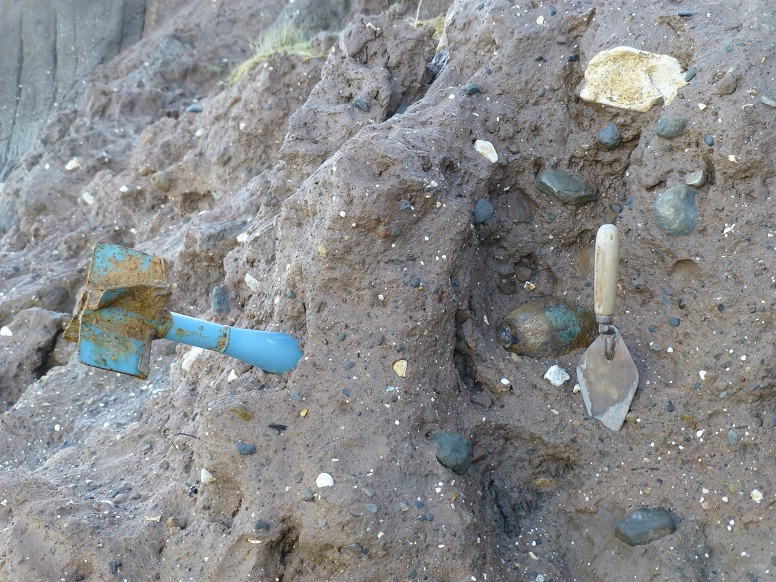 Erosion of the cliff at the firing range sometimes delivers the wrong sort of shell on to the beach [07/11/13]. 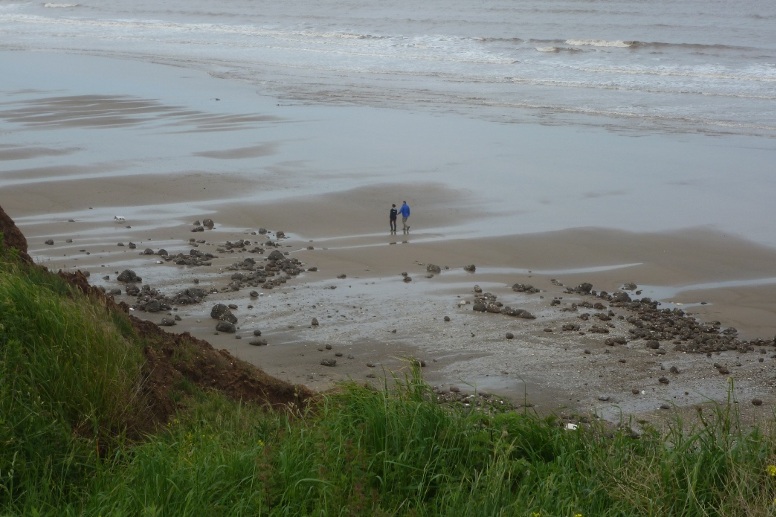 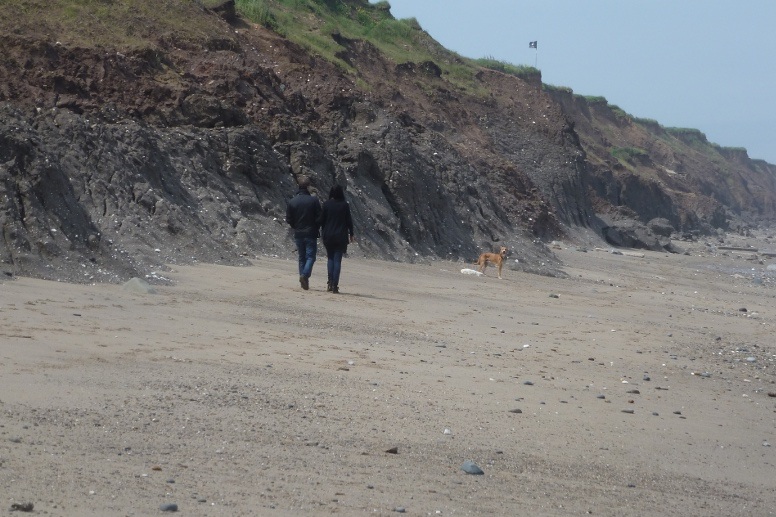 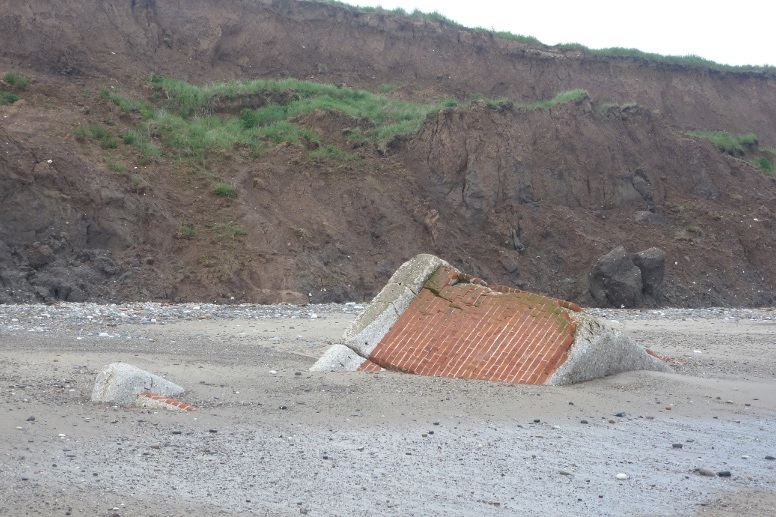 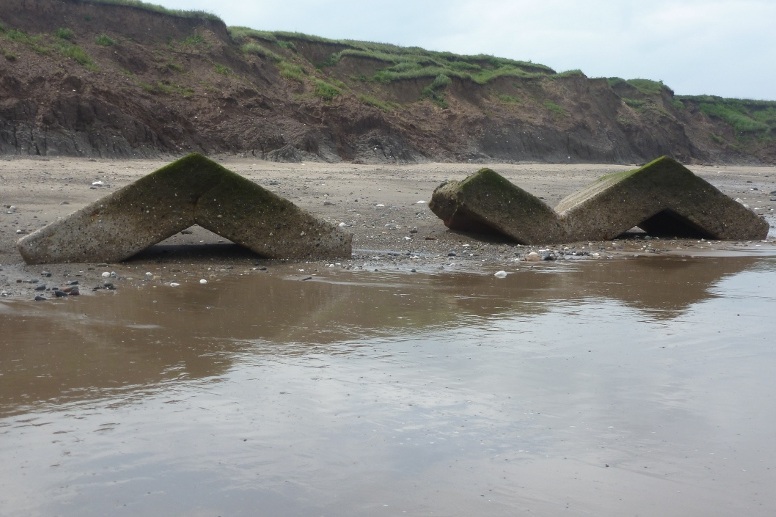 Ordnance Survey sheets published 1855 show Great Colden as a hamlet (it was previously a village having a church).

By taking coordinates to the beach, a street plan may be traced out in the sand, several metres below the level of the former Great Colden. The exercise possibly helps to put a sense of scale to the loss by erosion. 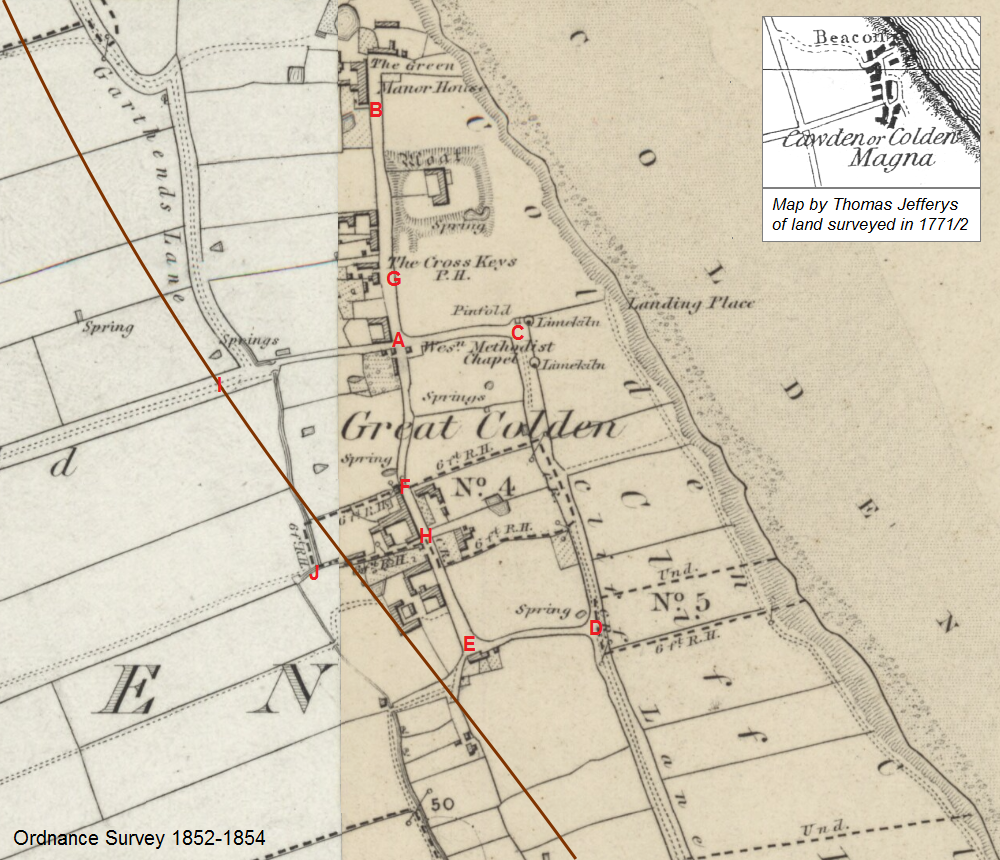 The sheets were the result of survey work carried out between 1852 and 1854. An inset depicts the arrangement of the hamlet according to Joseph Hodskinson, one of three surveyors engaged in producing the Jefferys Map of Yorkshire, commonly dated 1771/2.

It appears that the principal way into Colden changed during the period which separates the maps. This was a consequence of late eighteenth century field enclosures.

The brown line across the main map marks the approximate course of the cliff line at autumn 2011. A cliff recession of 293 metres is calculated for the land occupying the upper part of the map, and 268 metres for the land in the lower part – see monitoring profiles 55 and 56 in the cliff loss data spreadsheet.

Within the plan of the hamlet, some measurement points are marked by red lettering. Information appears in the panel below.

Points B and C now lie beyond the low water line and cannot be reached, but others are accessible when the tide is out.

(The landing place indicated on the map was used for the extraction of sand, gravel, and cobbles from the beach until 1892, when such activities along the coast became prohibited in order to help reduce cliff erosion. Local population decreased as a result.)

All pictures in this section were taken 23rd December 2015.

Names in lower case first letters are for convenience of reference. 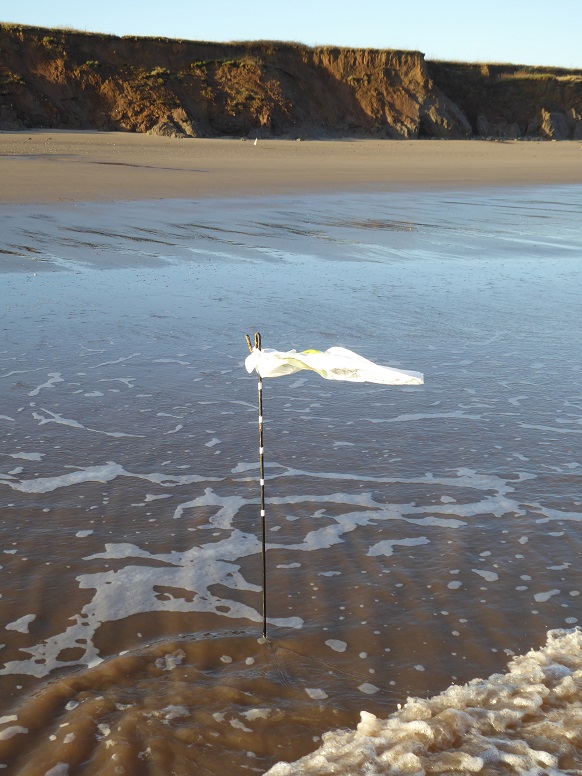 Alignment D to E, from Cliff Lane along south street. 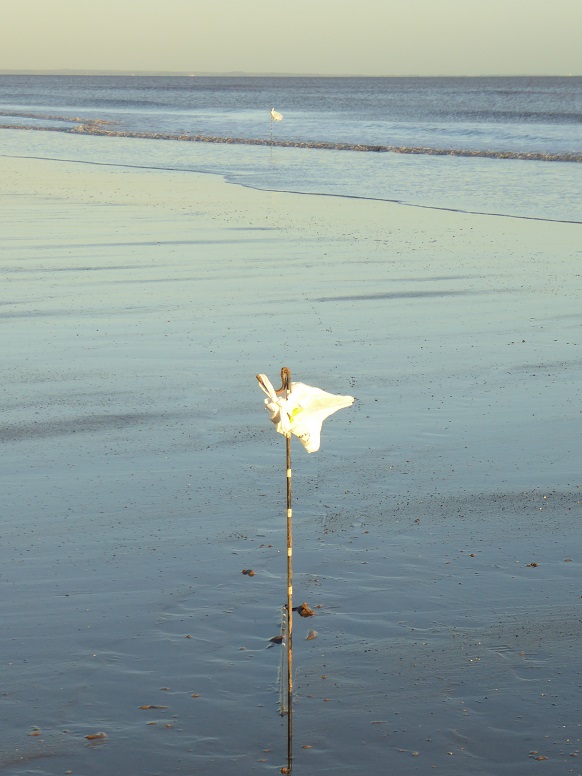 A to G, from the crossroads to the roadside opposite the Cross Keys. 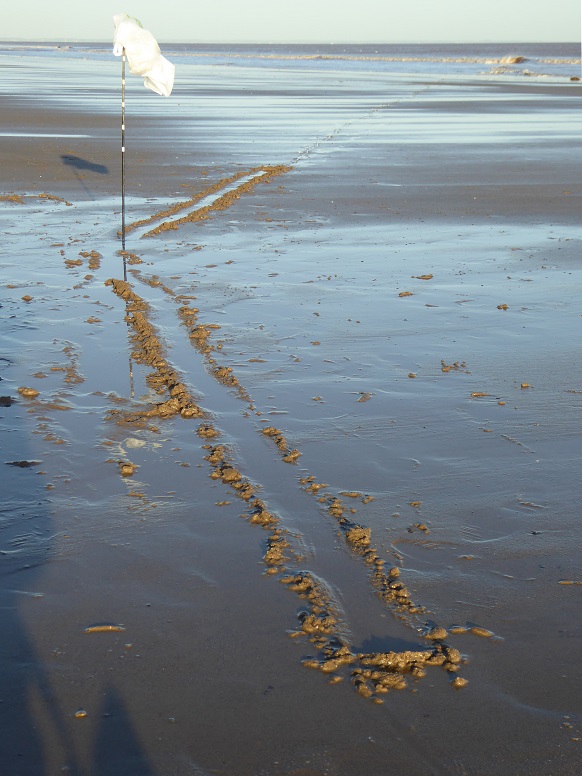 The angle in main street, at F.

Link to old picture taken from H looking north to F. The angle is beyond the houses. 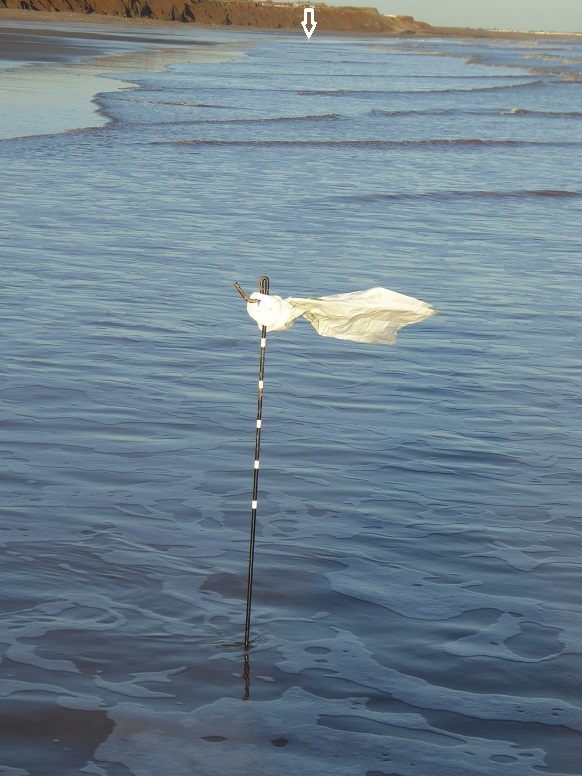 D to A, approximating the course of the cliff line around 1960. 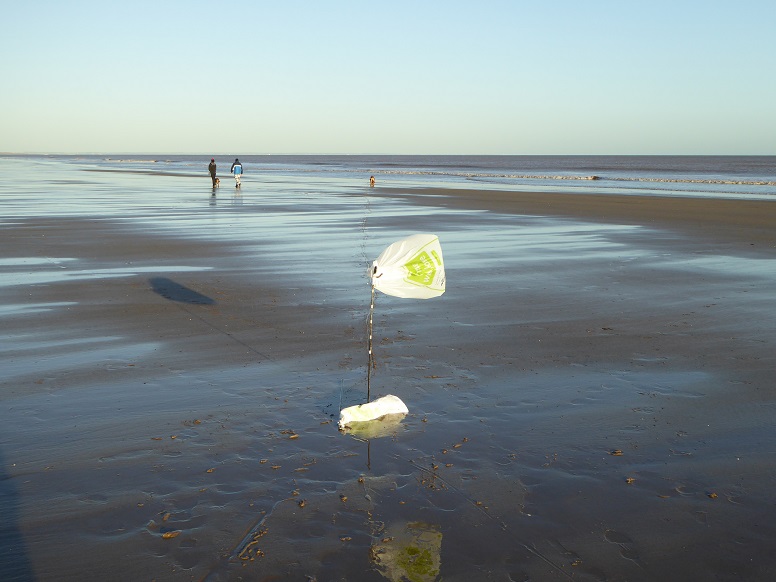 View along main street from F. The dog aligned with the marker is a little south of the crossroads at A.

Link to old picture taken from nearer the dog. In the old picture, the Methodist Chapel is on the right, and the crossroads lies immediately past it. Further on is the pub. 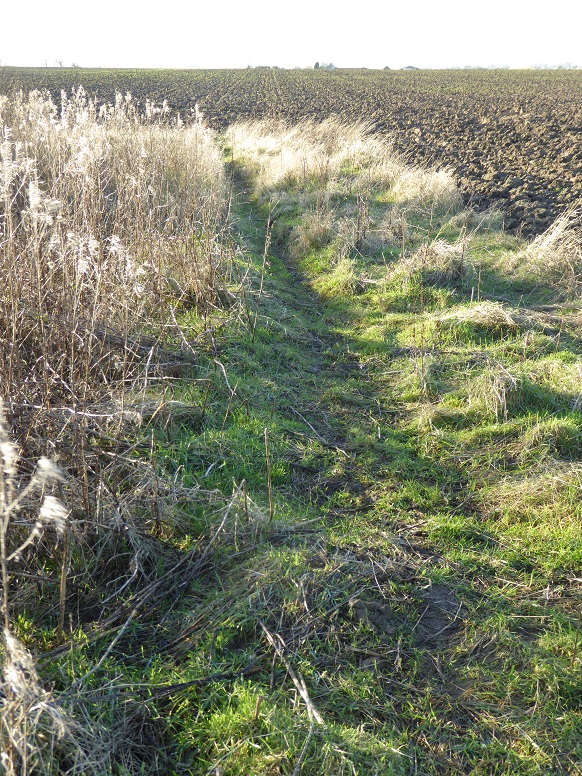 The original route into Great Colden (reference Jefferys’ Map of Yorkshire) would have started close to the farmhouse on the B1242, distance about 760 metres from camera, in alignment with present field cultivation rather than the path as seen. Picture taken near the cliff top, at point J on the OS map. 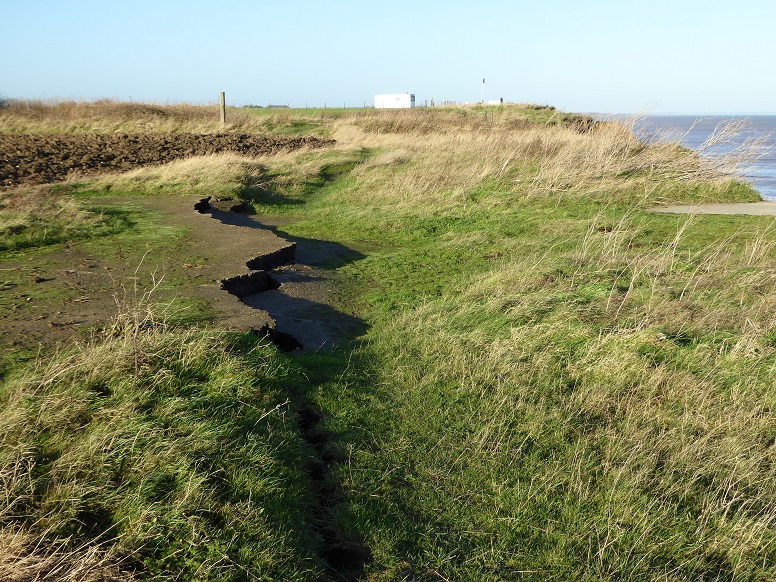 A patch of hardstanding is one of the last remaining ground traces of the original community of Cowden, or Great Colden.