Seaside Lane, Tunstall, runs 750 metres east from the village itself to the coastline where it bends south-east to follow the cliff. Until recently, a grass verge there offered vehicle parking, and the route led to lower ground with access to the beach.

An early Google Street View captures the former cliff top section of Seaside Lane separated from the sea by a strip of land [April 2010]. 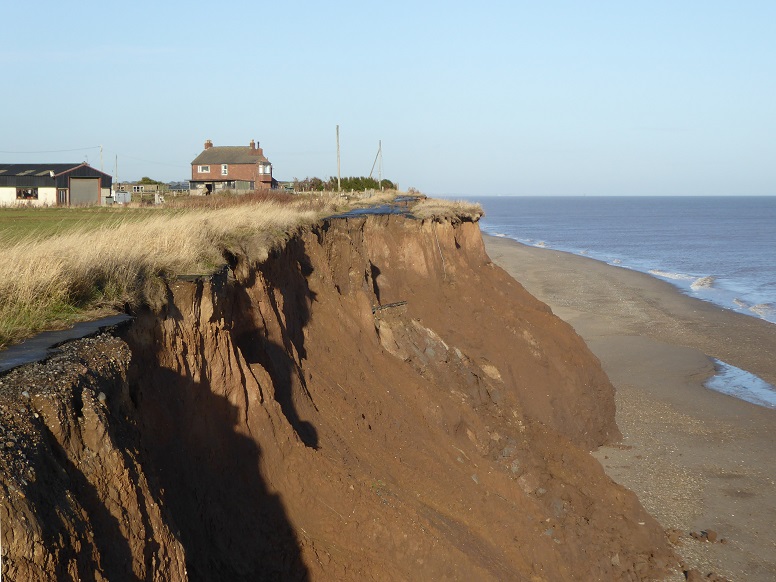 In under a decade, much of the road has gone. The bungalows seen landward in the previous picture were demolished, though Coastguard House remains to provide reference [12 November 2018]. 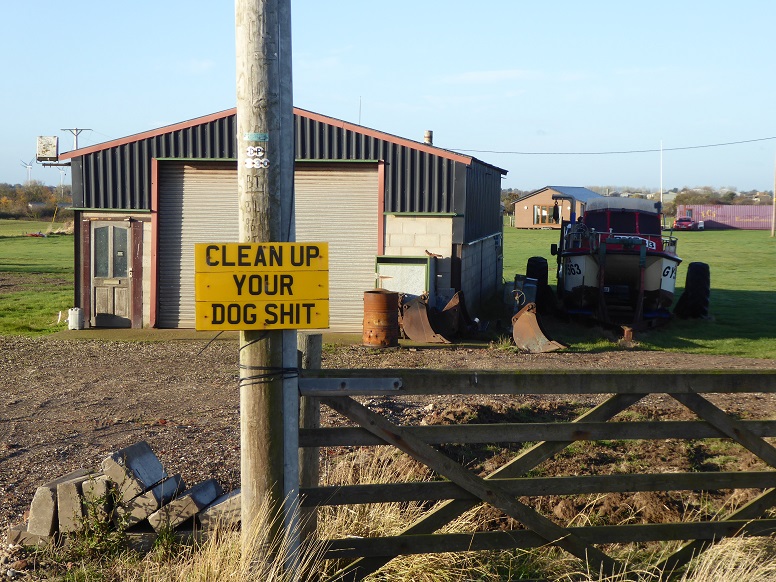 Little is left as the cliff recedes. In the distance is a newly erected (and potentially moveable) log cabin [12 November 2018]. 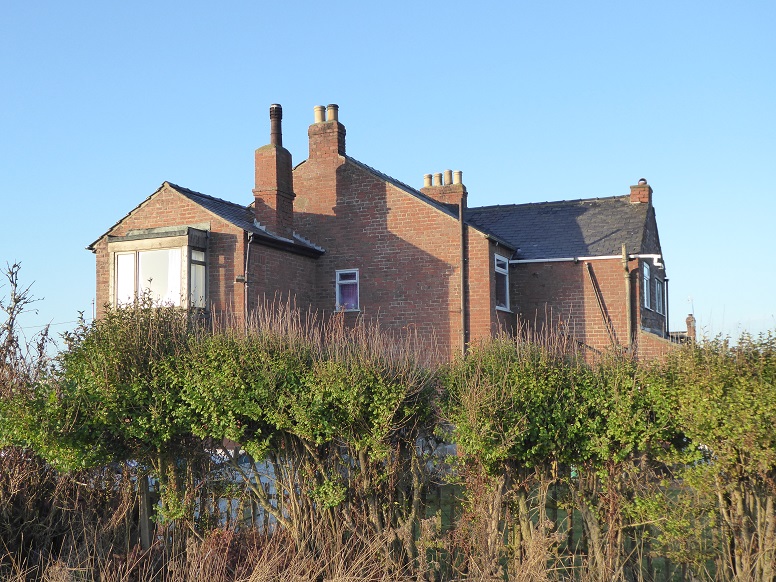 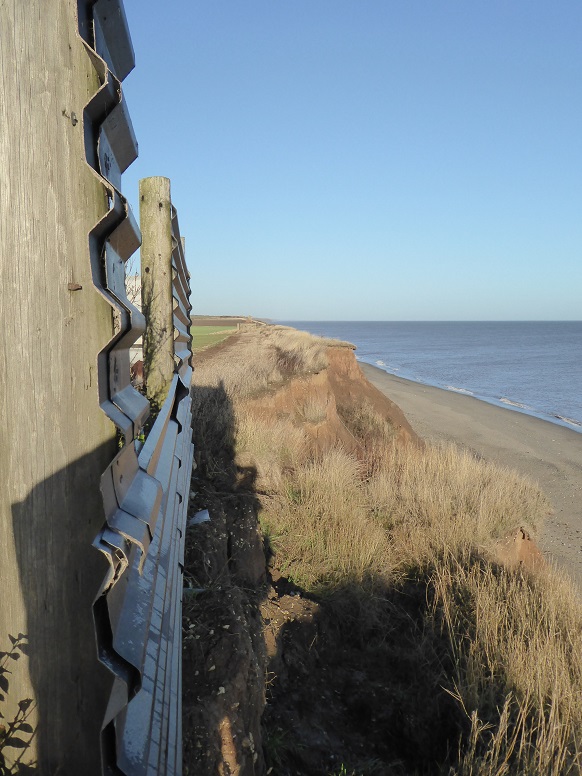 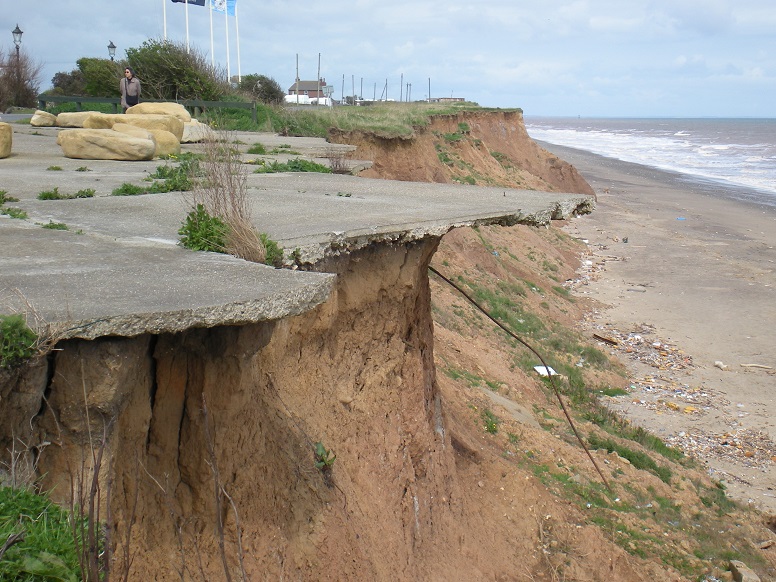 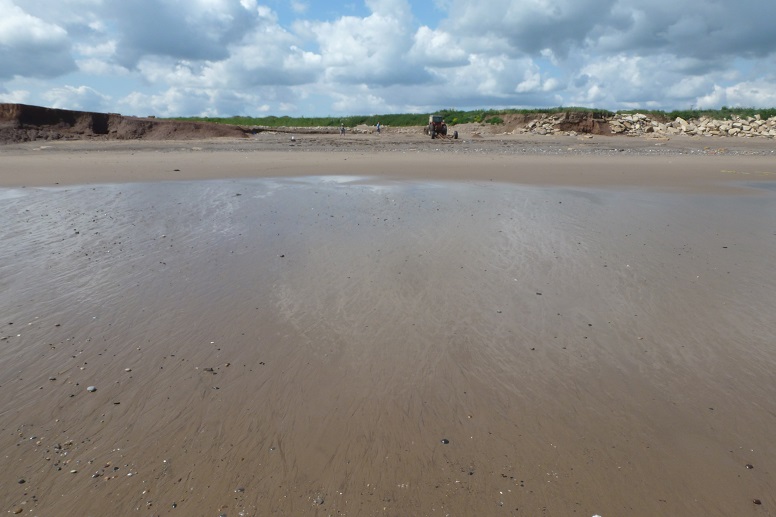 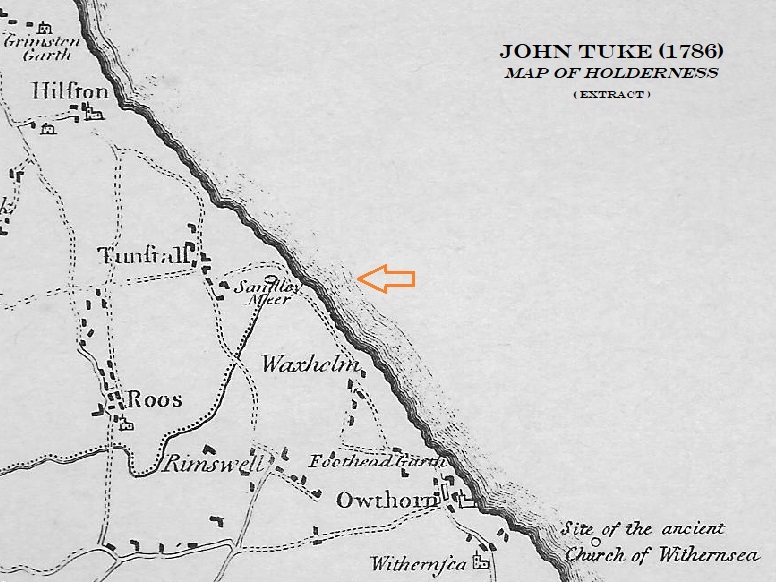 John Tuke’s Map of Holderness, dated 1786, depicts ‘Sandley Meer’ to be intact, as do earlier maps. The site is marked on the Enclosures map 1777 (ref. British History Online), where it is also spelt Sandley, but the situation is not clear. There is no mere by the Ordnance Survey of 1852.

Aerial view of the mere site, 2012, from Channel Coast Observatory (see aerial imagery). Calculation places the cliff line in Tuke’s time (1786) seaward of the visible peat deposit, about where lower beach changes from darker to lighter. 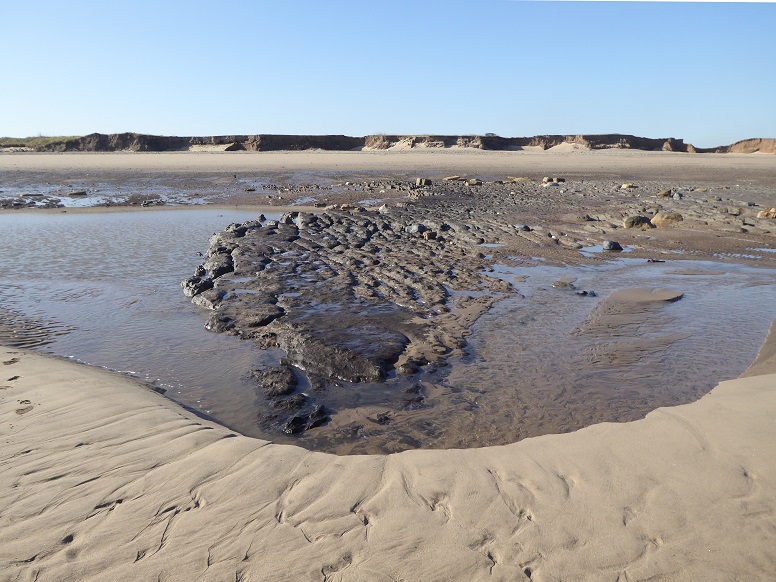 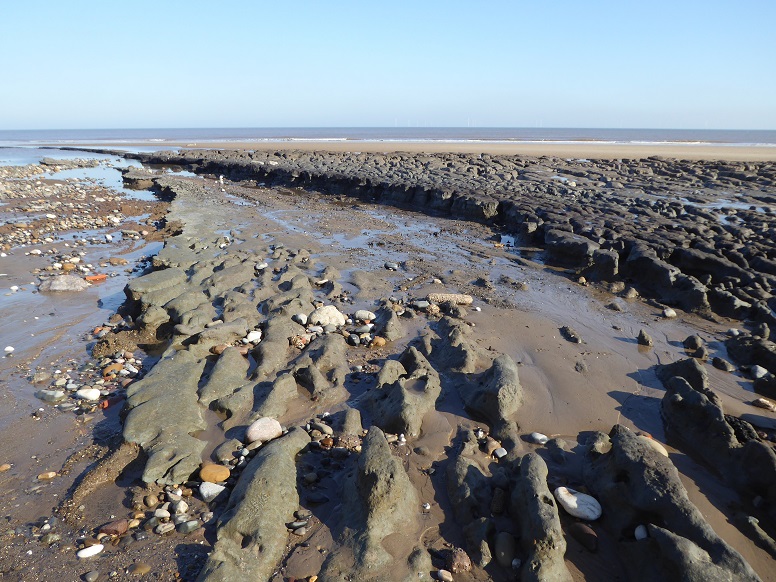 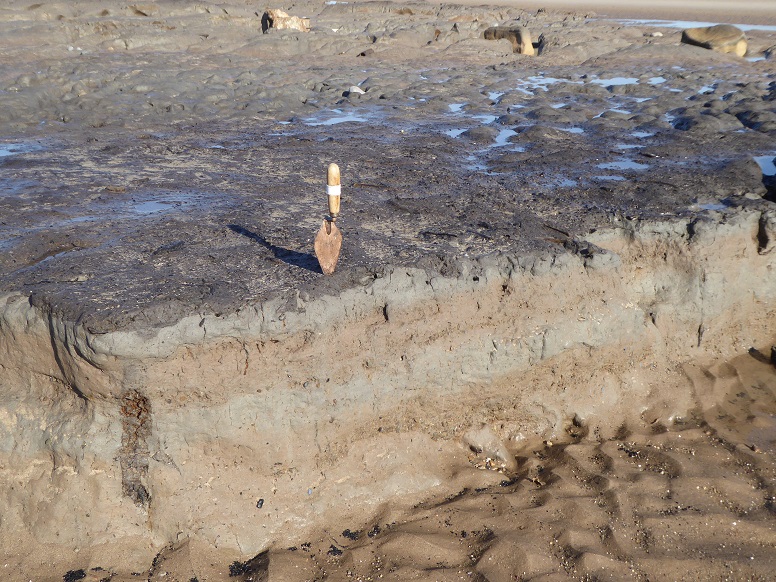 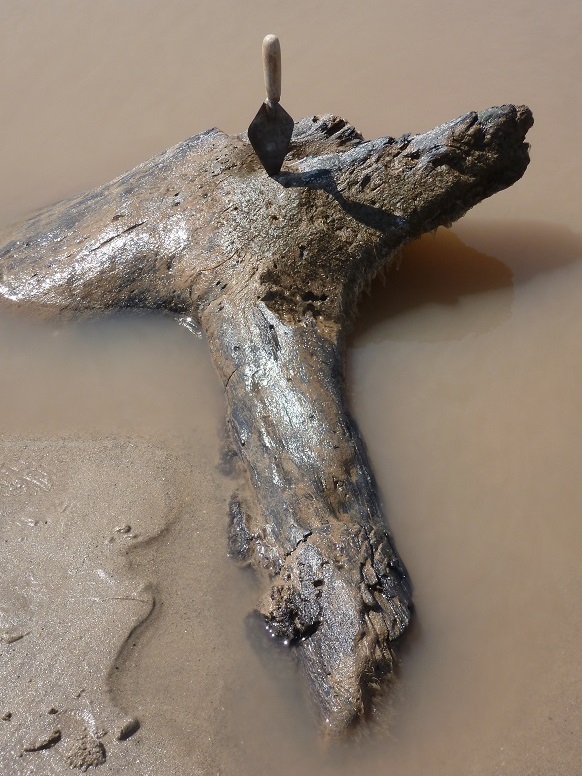 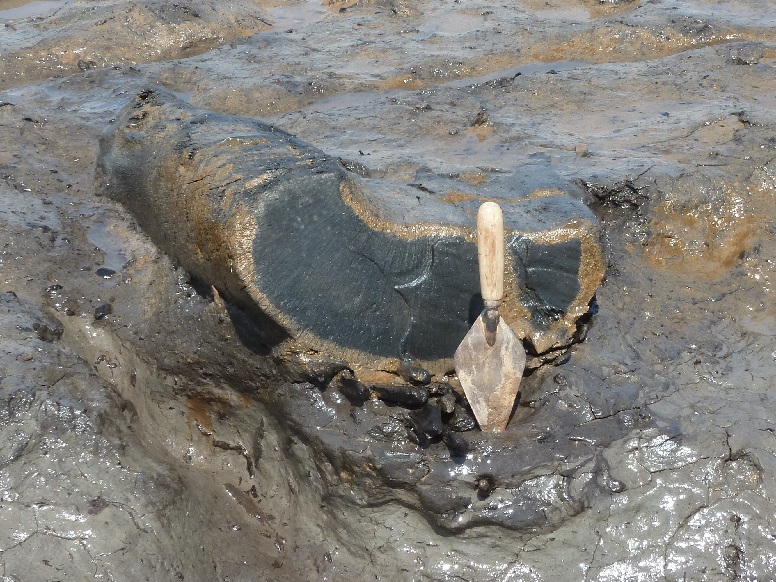 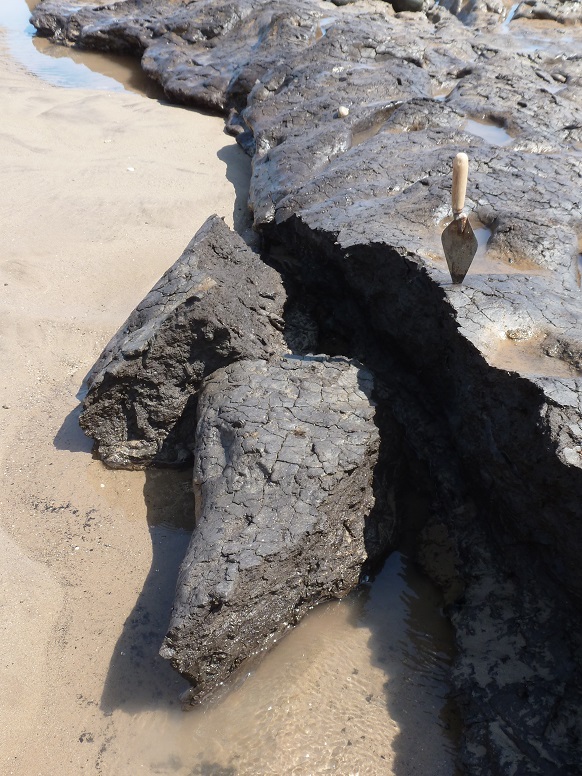 Like the coastline in general, the mere site is subject to continual erosion [25 June 2013].

This composite picture shows the deposit from the cliff foot. Quality of exposure varies according to beach conditions [26 February 2021]. 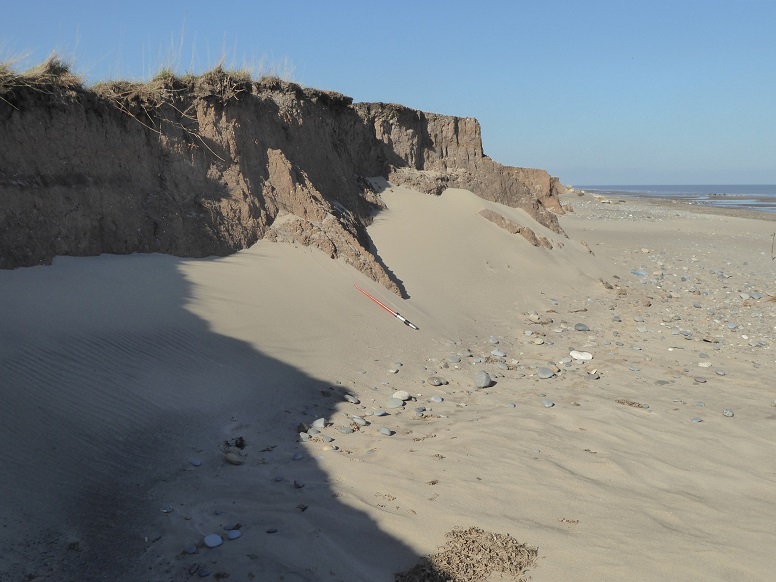 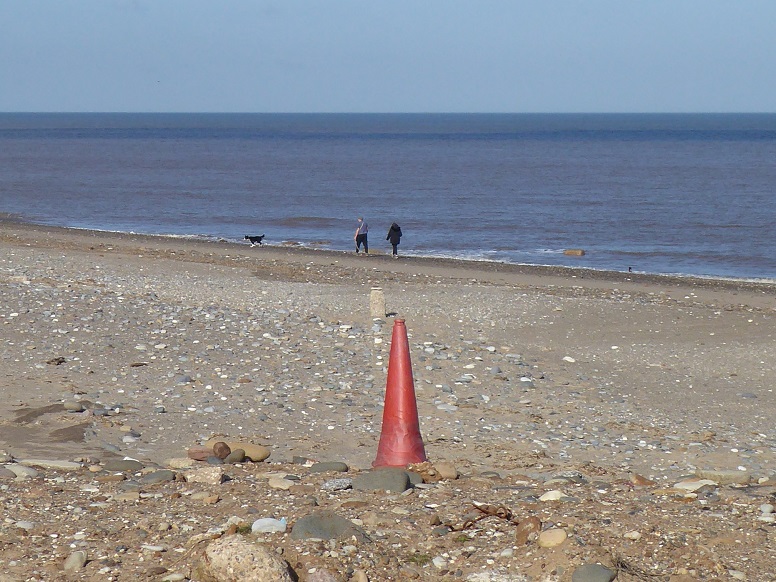 Sand le Mere represents the first landfall of the Greenwich Meridian, also called the Prime Meridian, at 0° longitude, as traced from the North Pole.

In the picture, beach strollers cross hemispheres from east to west. A concrete pillar, erected near the Meridian to celebrate the Millennium, was lost to erosion in 2003 (see Graham Dolan). For now, a washed-up traffic cone placed at the edge of a step-high cliff, aligned by a row of stones to a breeze block on the beach, will have to suffice [26 February 2021]. 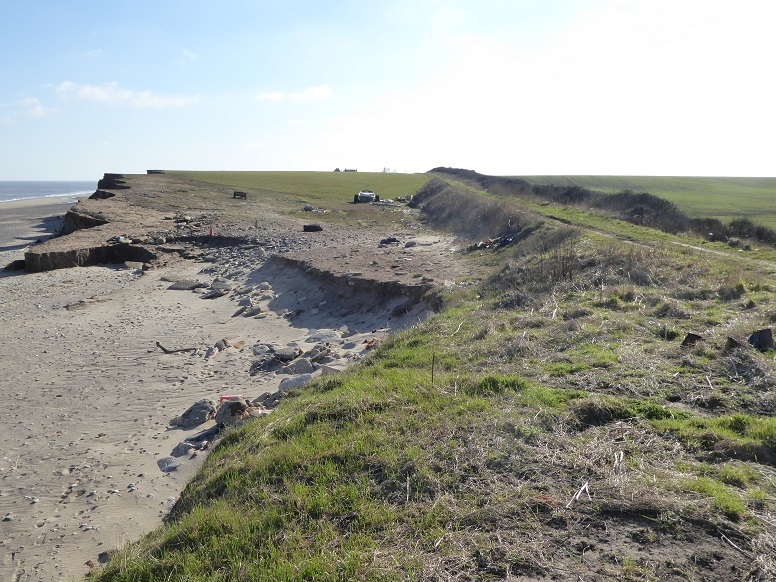 View across the diminishing inlet, hitherto used as a boat compound. The ‘Meridian cone’ is just visible [26 February 2021]. 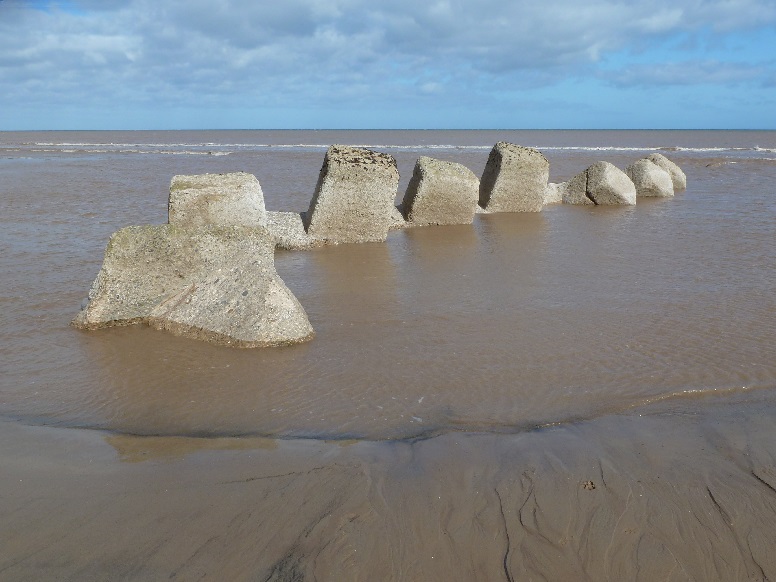 During the early 1940s, the low land at Sand le Mere was prepared against the threat of German invasion. See the pillboxes page and especially Austin J Ruddy. These anti-tank cubes originally traversed the upper beach but coastal erosion leaves them closer to the low water mark [29 September 2012]. 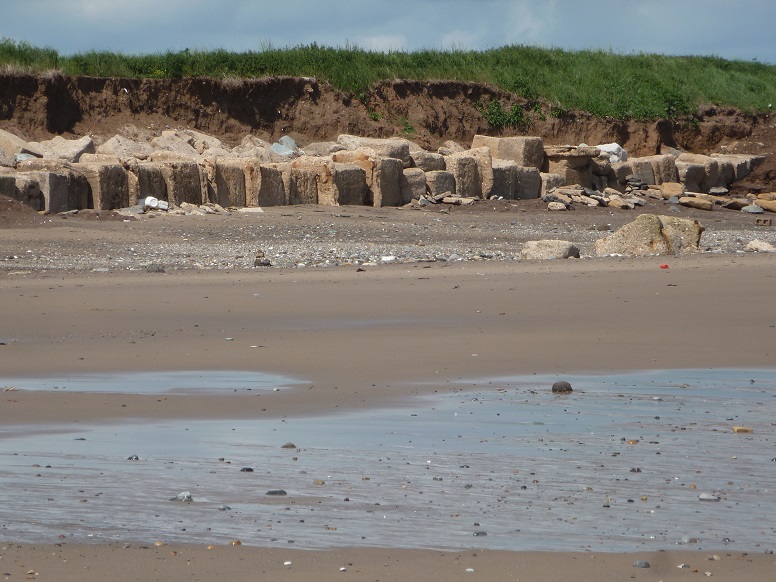 There is not a lot of the wartime defences to be observed in situ. Material has been repeatedly recycled to serve as cliff protection [25 June 2013].

Perhaps somewhat counter-intuitively, land drainage in southern Holderness tends to flow away from the coast, towards and into the Humber Estuary. For instance, Tunstall Drain begins at Sand le Mere, becomes Roos Drain, then Keyingham Drain, to discharge into the Humber at Stone Creek, south-east of Hull.

A bank at Sand le Mere protects fields and property from incursion of the sea during high tides and storm surges. Similar banks have been periodically damaged and repaired since at least the early seventeenth century. 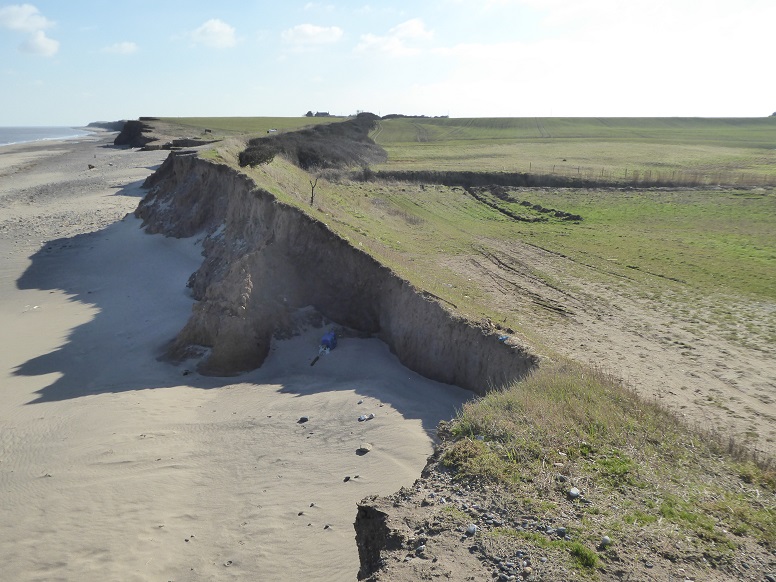 Tunstall Drain, left to right at upper centre, is cut through land that in places is only a little above sea level [26 February 2021]. 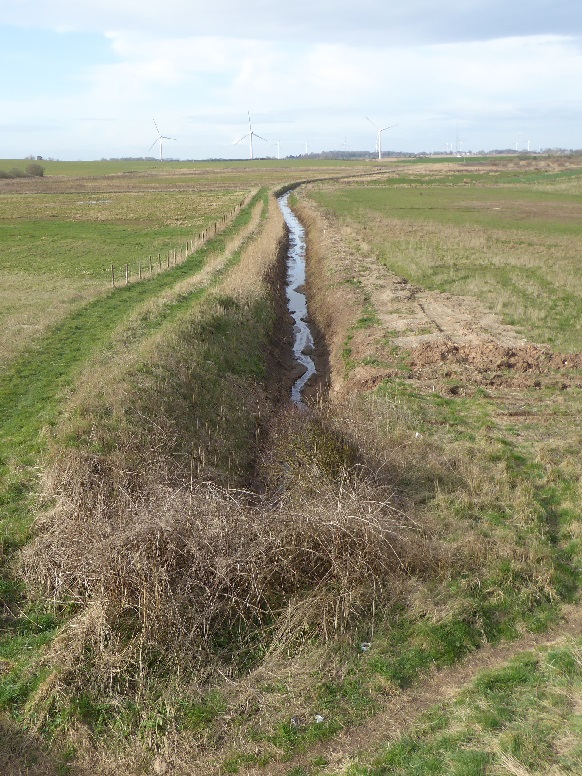 The start of the Tunstall and Roos section behind the bank. From here, direction of flow is inland [25 March 2021]. 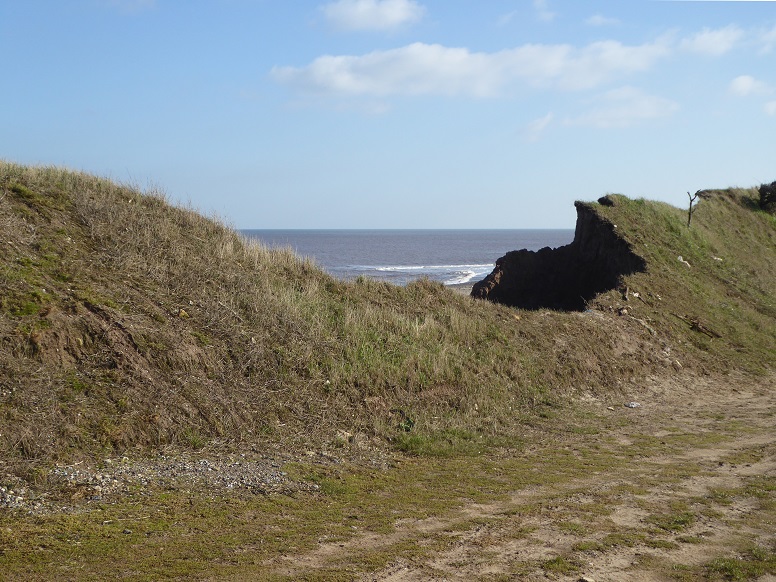 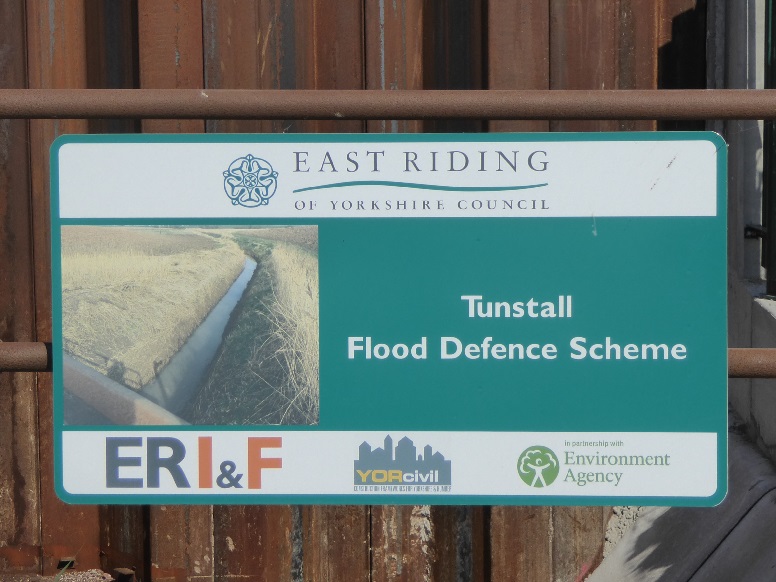 Following revision of an original proposal, new defences are installed 1.4 kilometres downstream (inland) at Thirtle Bridge, where the B1242 crosses the drain. The work, carried out by Breheny Civil Engineering at a cost of £600,000, was completed at the end of July 2021.

Pictures and text by Brian Williams, unless otherwise stated.