Sands Lane, the route to Barmston from the A165 Hull to Scarborough via Bridlington road, currently continues some 375 metres east of the village to reach the cliff. At the cliff, the northern side is occupied by the Barmston Beach Holiday Park where about 17.3 acres are utilised. 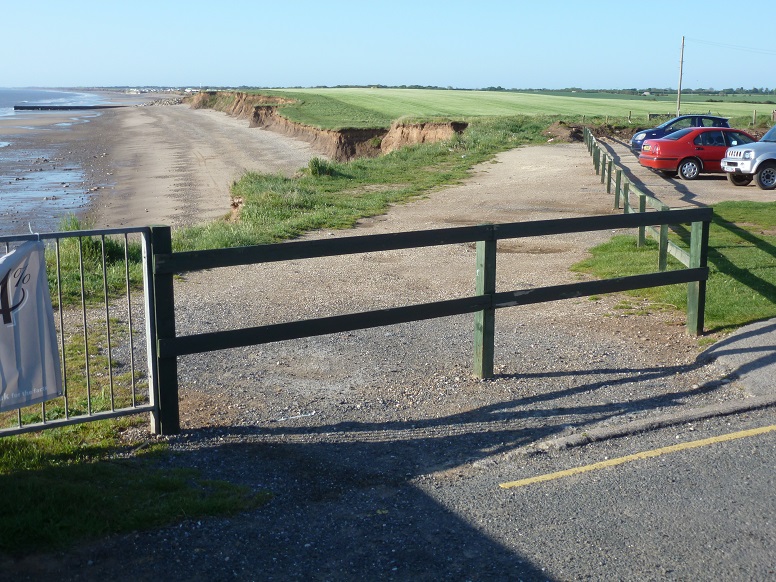 To the southern side is a car park, ever reducing as a result of coastal erosion. From here, the cliff line forms a crenulate (notched) bay, a feature produced by the terminal groyne effect. A depression in the land surface beyond the car park marks the site of the former Barmston South Mere. Crossing the beach in the distance is the Barmston outfall [2 June 2013]. 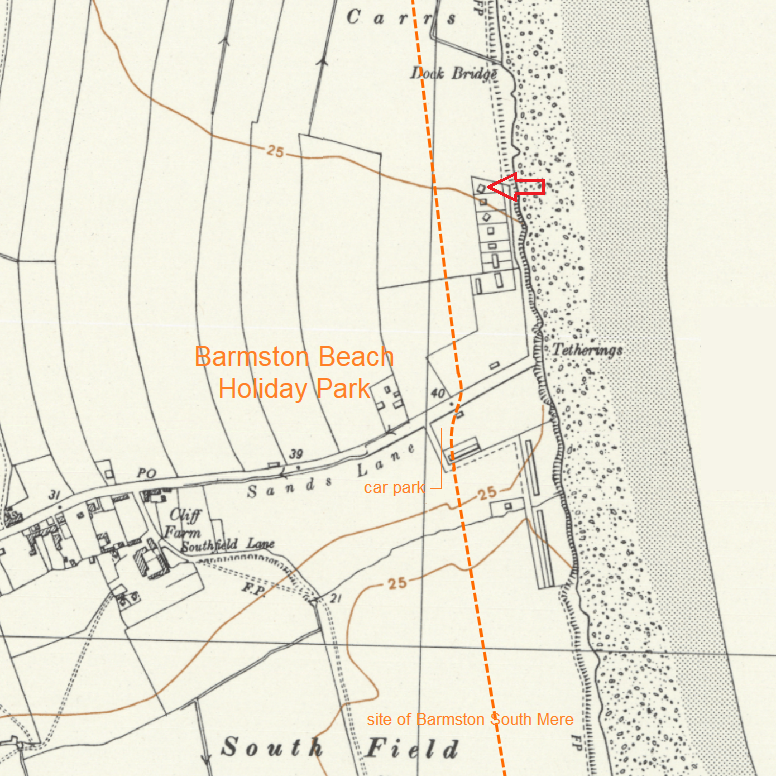 The Ordnance Survey map for 1956, published before the establishment of the holiday park, shows a row of detached bungalows to the north of Sands Lane overlooking the sea. (There were bungalows to the south side, too.) A dashed line denotes the approximate position of the cliff in 2017. 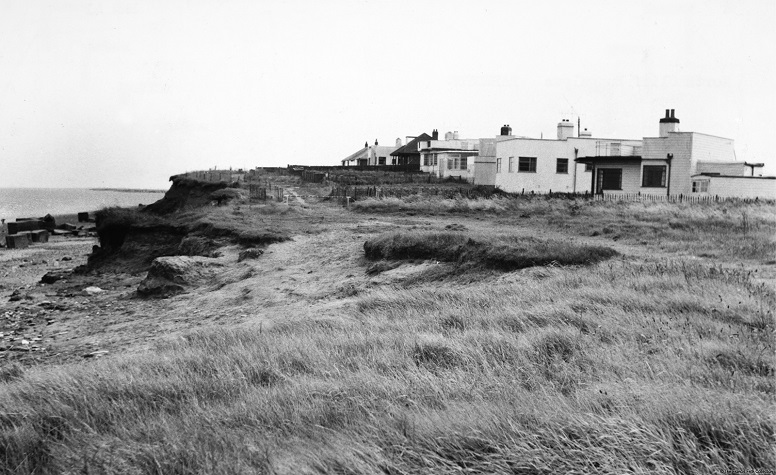 The red arrow added to the above OS map points to the nearest bungalow in the picture, taken around 1960. Gardens and a track can be seen to the front of the properties [photograph on licence from the Francis Frith Collection, ref. B850041]. 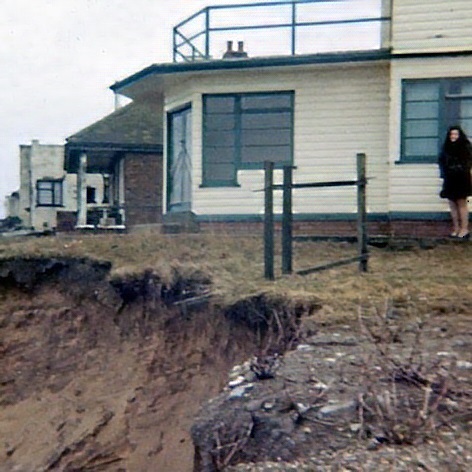 Ten years later, the edge of the cliff is almost at the door of the bungalow [7 March 1971]. 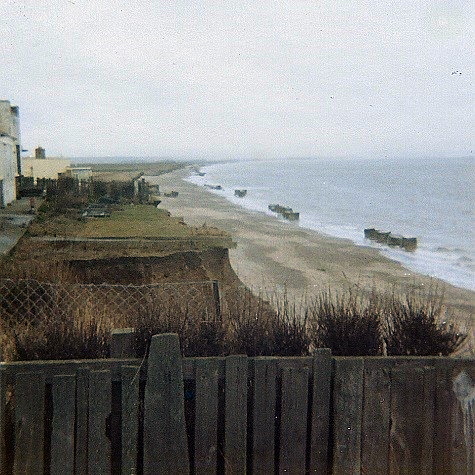 Opposite direction. The anti-tank blocks seen on the beach, originally placed for the purpose of thwarting an enemy landing, were repositioned around 1978 at the foot of Sands Lane as a defence against the sea [7 March 1971]. 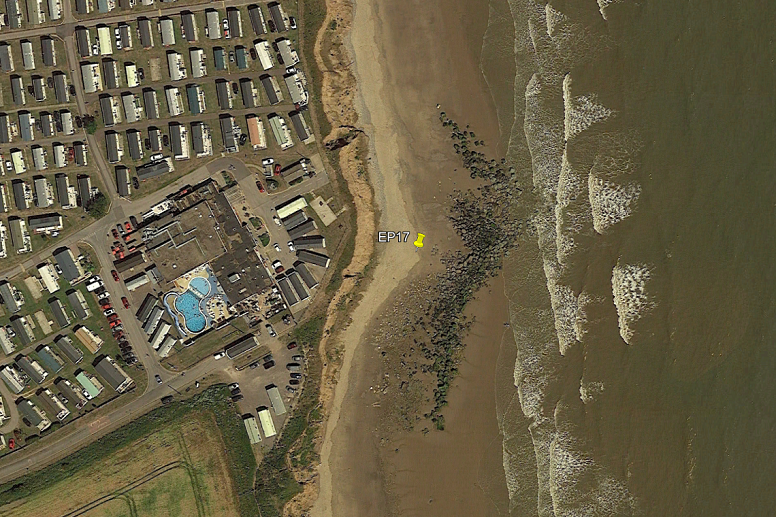 For a while, the barrier of recycled wartime debris provided some direct protection, though with consequences to the south. However, as the Google Earth image dated 1 July 2018 portrays, cliff retreat was to resume behind the structure.

The pin refers to Erosion Post 17 – for background, see data in detail: posts. Set up near the end of Sands Lane as existed in 1951, the original EP17 was lost to the very process it was intended to measure. A replacement, depicted in the aerial image, was installed in 1982, about four years after the defence work, and decommissioned in 2009. Over a period of 27 years, total cliff recession is recorded as 34.31 metres. 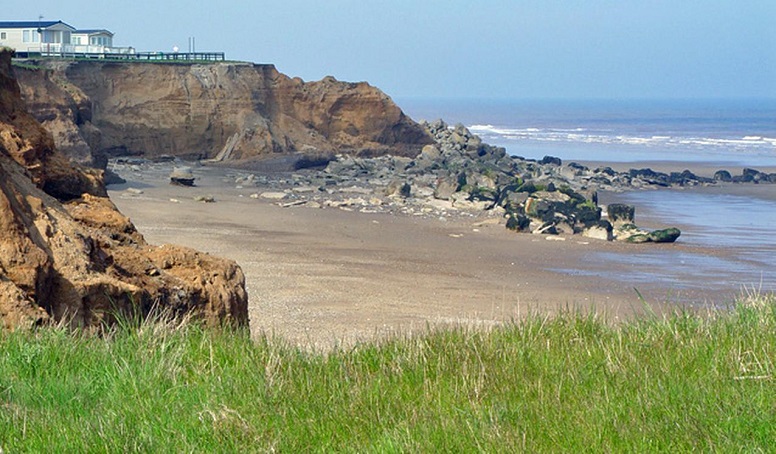 As the artifically created headland began to erode, a rare (for this coast) stack and arch were formed [15 September 2011]. 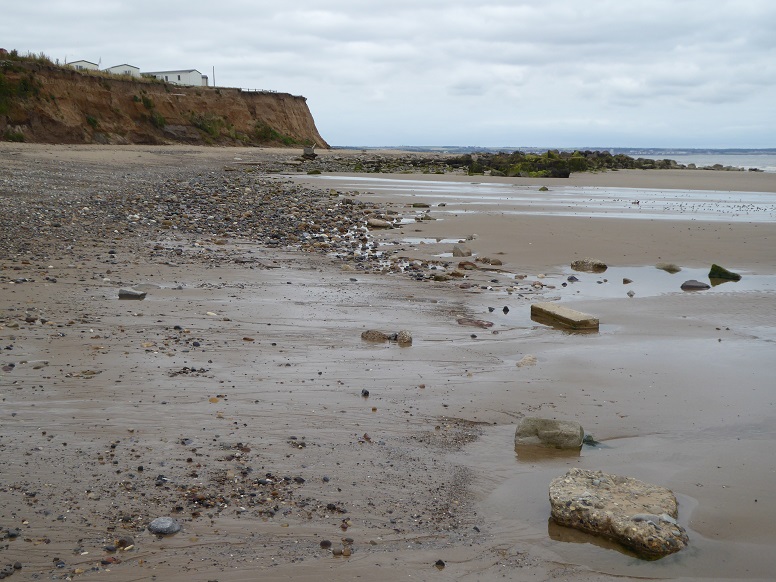 In recent years, the concrete heap is undergoing dispersal by the tides [12 July 2018]. 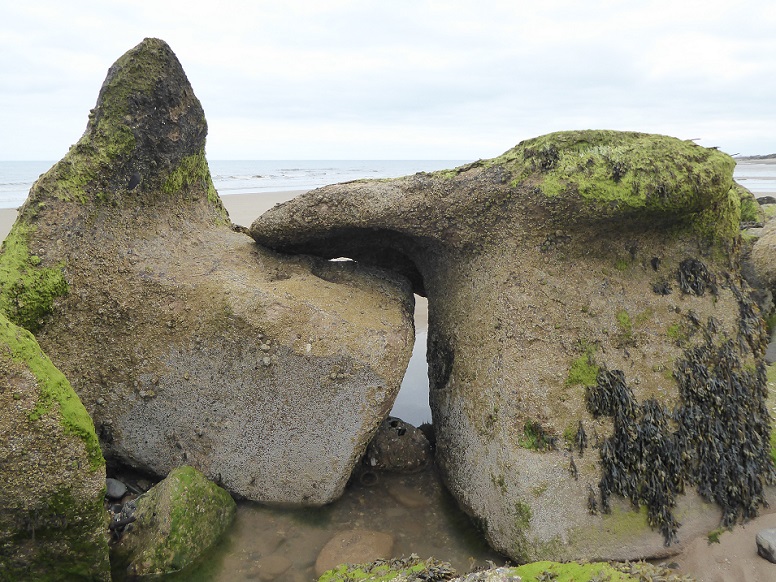 
The Beverley and Barmston Drainage Act was authorised in 1798 and construction completed in 1810.

In the southern section, water from the land was channelled into the River Hull, about a mile upstream of the Humber estuary. Rainwater in the northern section was diverted by a new cut taking it to the North Sea at Barmston.

Until the late 1970s, the Barmston end flowed directly across the beach. Waves were able to enter the drain during storm surges. Not only would the land be affected by salt water but the drain itself was subject to partial blockage by beach sediment.

An outfall structure was built using reinforced concrete box sections to carry water across the beach, and a rock barrier installed across the drain to prevent ingress from high seas. 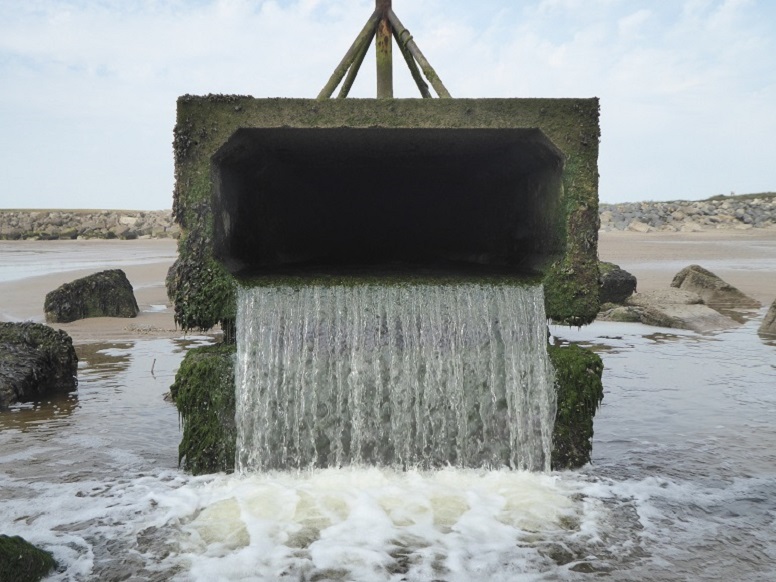 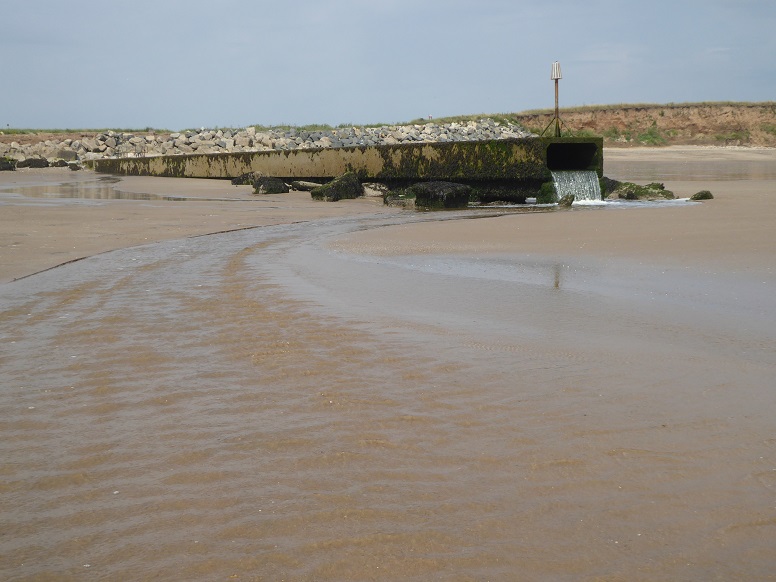 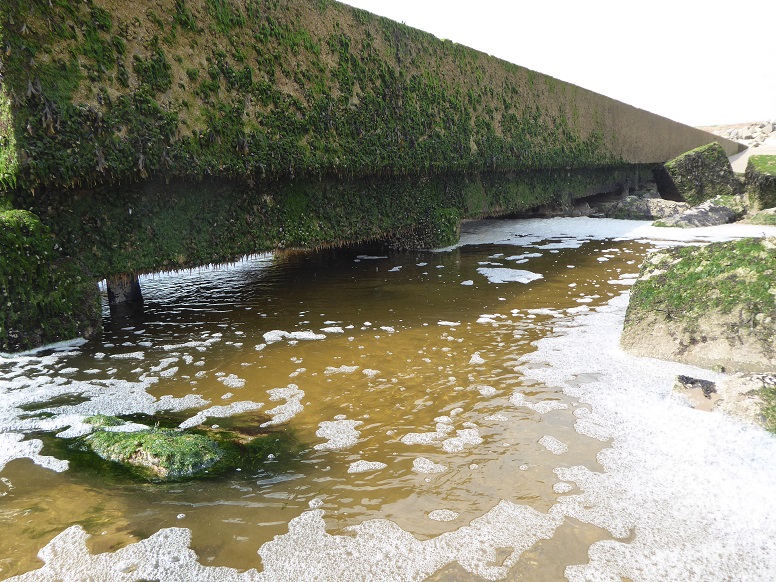 As the cliff line recedes, the general slope of the beach moves landward. The discharge end of the outfall, originally at beach level, became undercut [16 July 2019]. 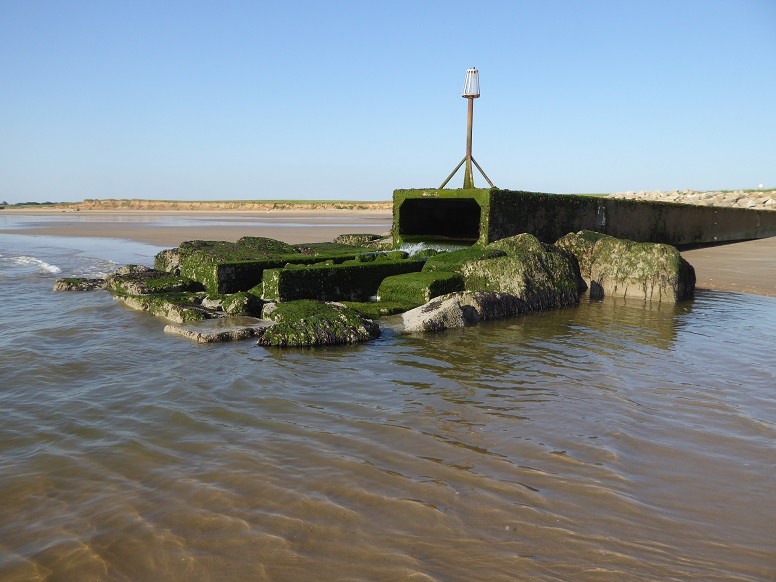 In 2020, sixteen culvert units were removed, reducing the overall length of the structure by twenty-four metres. Some of the supporting beams remain to form a spillway [23 June 2022]. 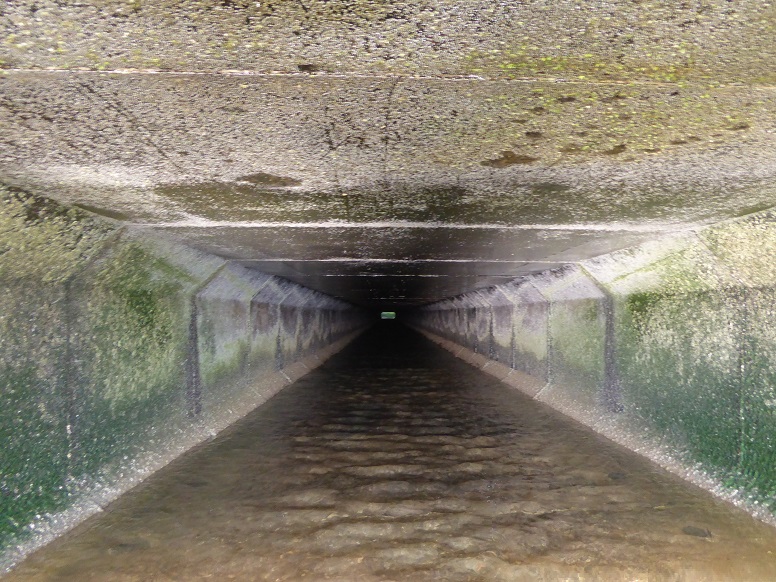 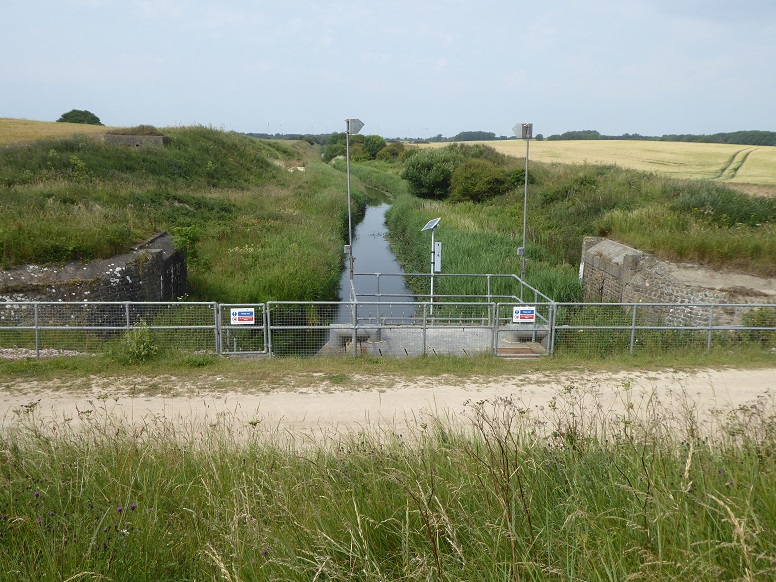 Beverley and Barmston drain inland of the outfall. At upper left middle distance in the picture, partially obscured by vegetation, is a wartime pillbox, ref. UL2 [16 July 2019]. 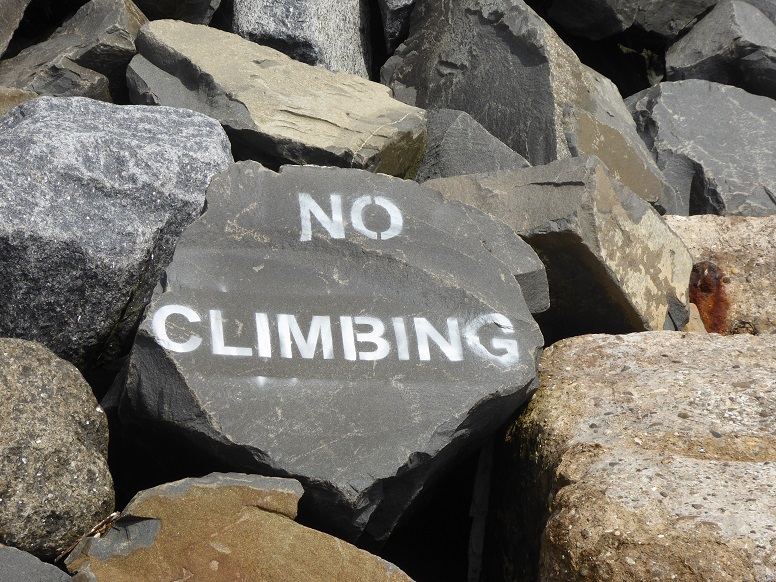 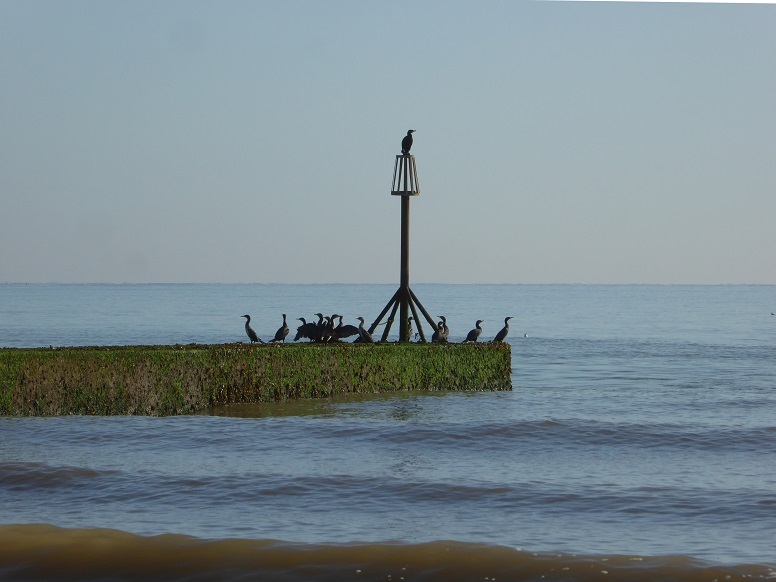 Beach level on the updrift side of the structure (left) is higher than that on the downdrift side (right), in accordance with the terminal groyne effect [16 July 2019].


The cliff face around the end of Sands Lane represents an important record of events during the retreat of the North Sea ice lobe that once covered the area.

Lying above a base of dark brown Skipsea Till is a sequence of sands, silts, and clays, with gravels and course sand. Finer material may be laminated, meaning it was laid down in cycles, for example annually. These sedimentary features are the result of meltwater collecting in a lake environment, which later became separate meres.

Cross-bedding is indicative of material being washed out of the retreating ice perhaps to produce deltas that extended into the lake. Significant deformation is apparent within the deposits. Glacial retreat was not a continuous process but one puncuated by stillstands and readvances. The height of the ice at maximum would have been well above the present day land surface. 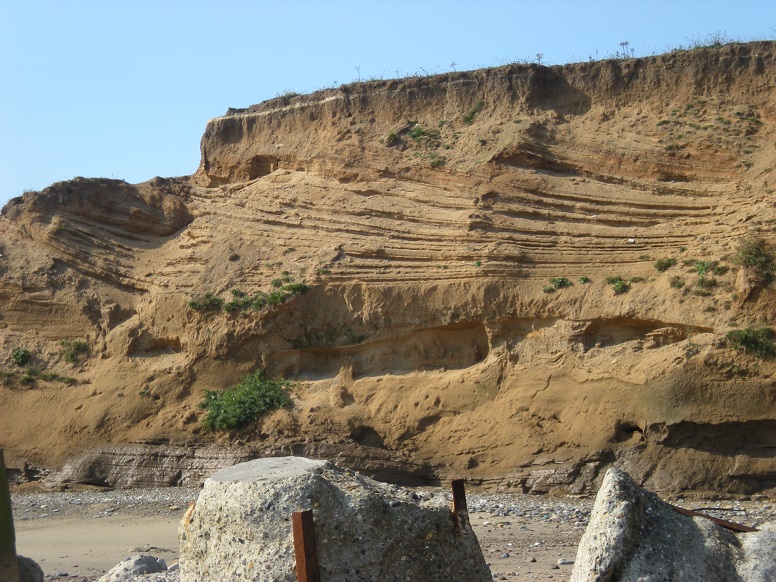 Units of sediment, each marking a distinct phase, with cross-bedding at the upper cliff [15 September 2011]. 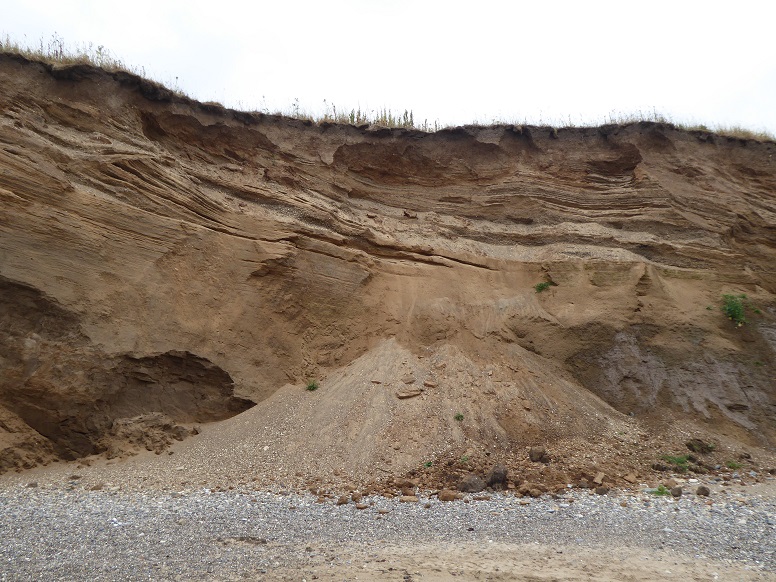 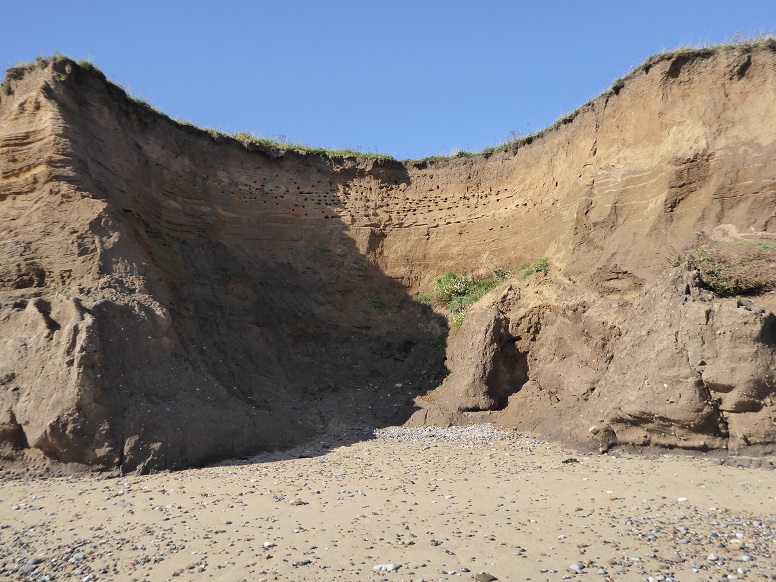 A sandy band high across this indentation is pitted with the burrows of sand martins (here vacated, the birds having departed for Africa). Lower cliff is Skipsea Till [22 September 2017]. 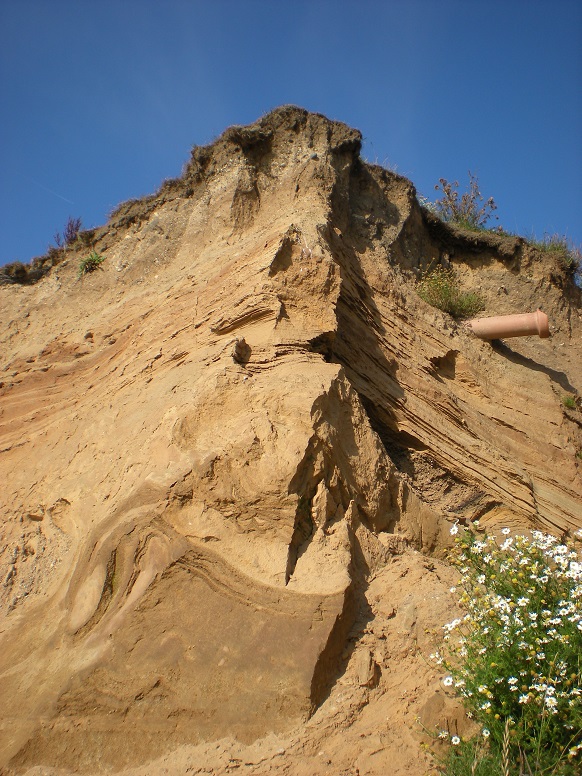 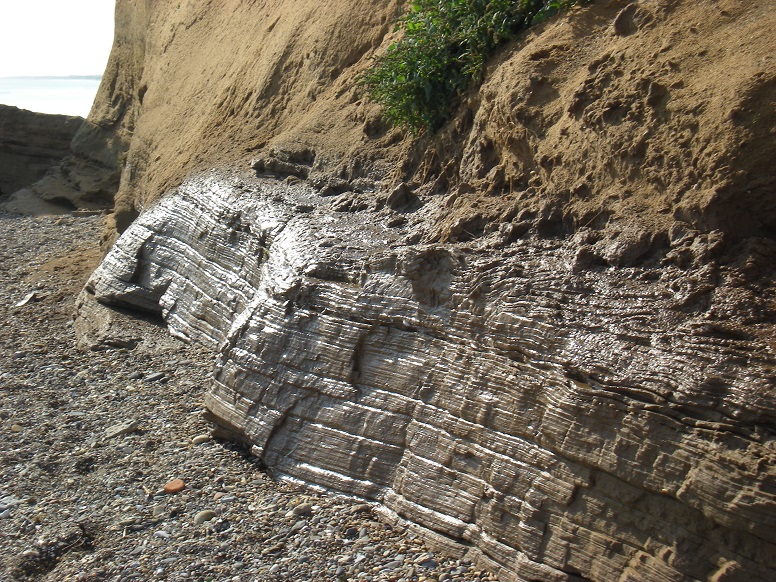 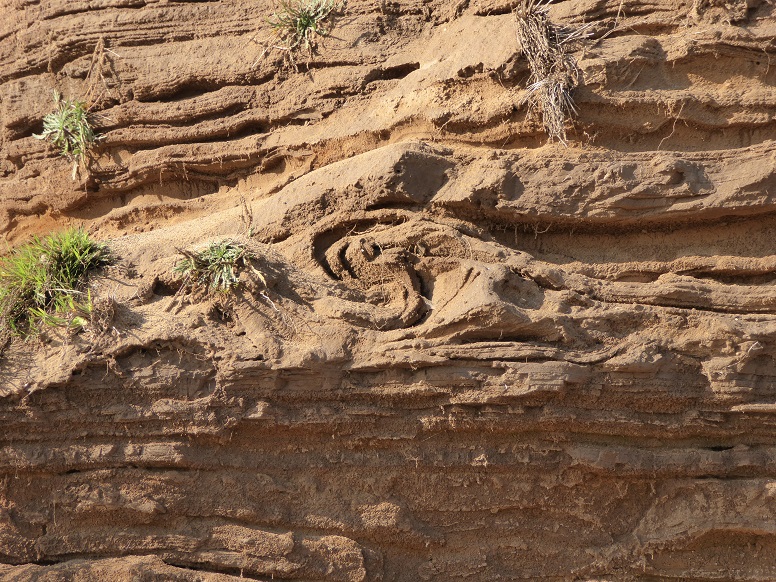 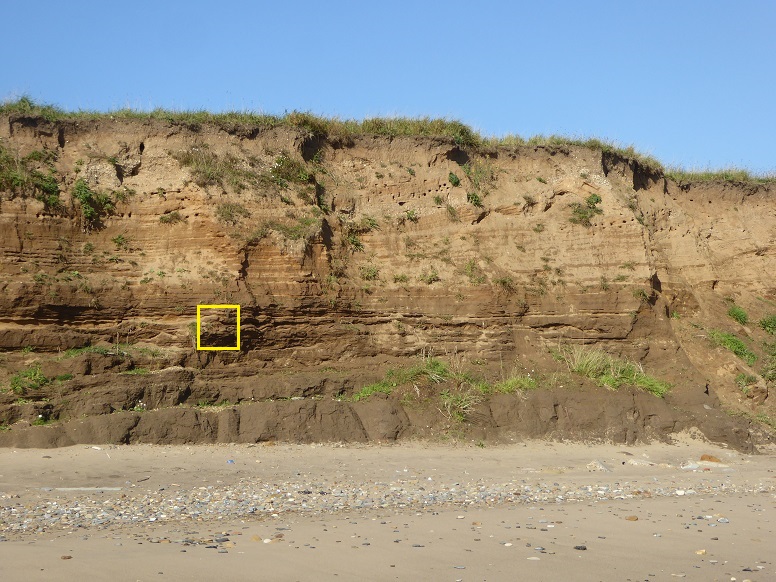 
Approximately 330 metres to the north of Sands Lane, the cliffs as described above come to an end and the land drops almost to beach level, hence the name Low Grounds. This is the site of Barmston (Main) Mere.

An outer zone of the site stretches a further 900 metres north and includes an inner zone of about 530 metres. The outer is generally farmed while the inner, subject to flooding by the sea, is left uncultivated. When in existence, the mere extended a distance eastwards from the present cliff line.

The results of a series of borehole samples taken across the site were published by the Rapid Coastal Zone Assessment Survey (RCZA / RCZAS) in 2013. See Site 2, pp. 14-18, Figs. 2 and 3. 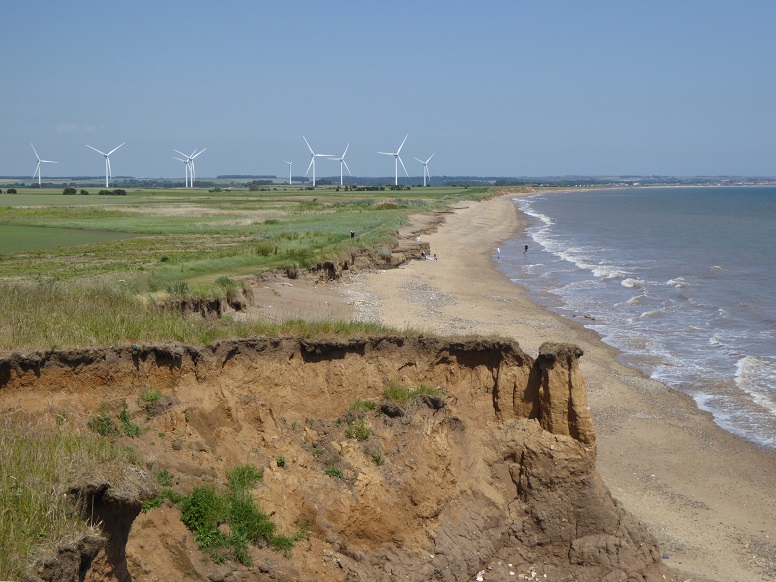 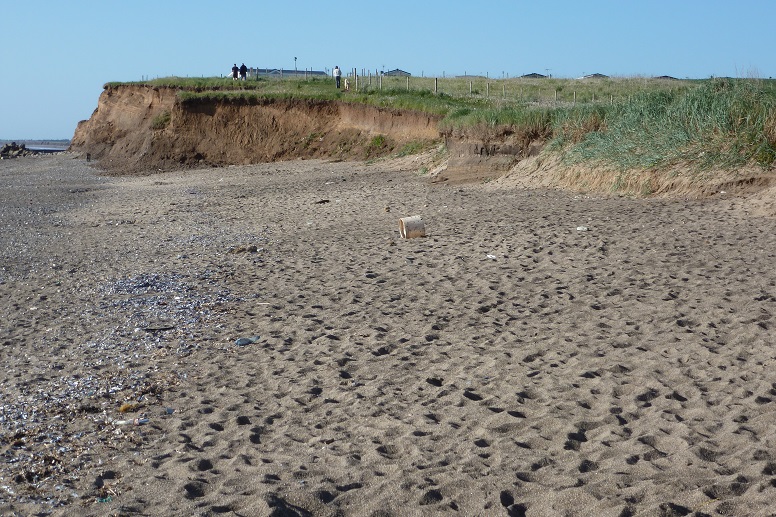 The transition from Barmston Cliff to Low Grounds affords easy access to the beach from the holiday park [2 June 2013]. 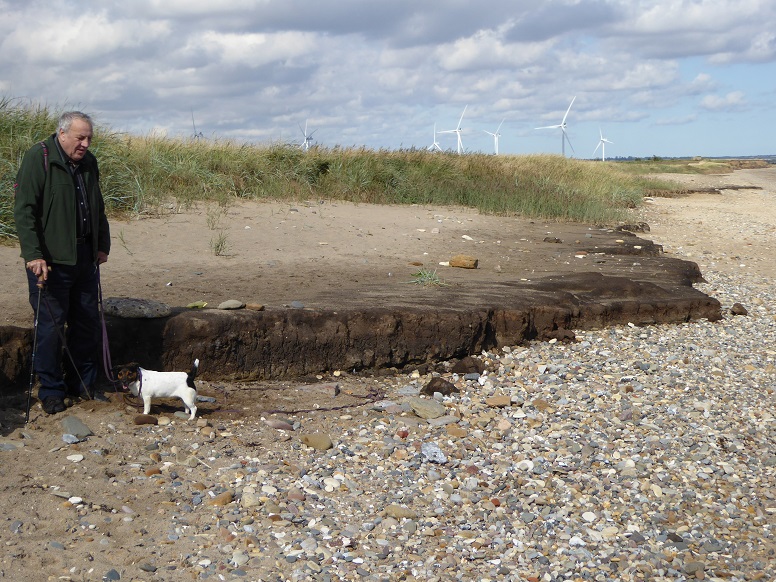 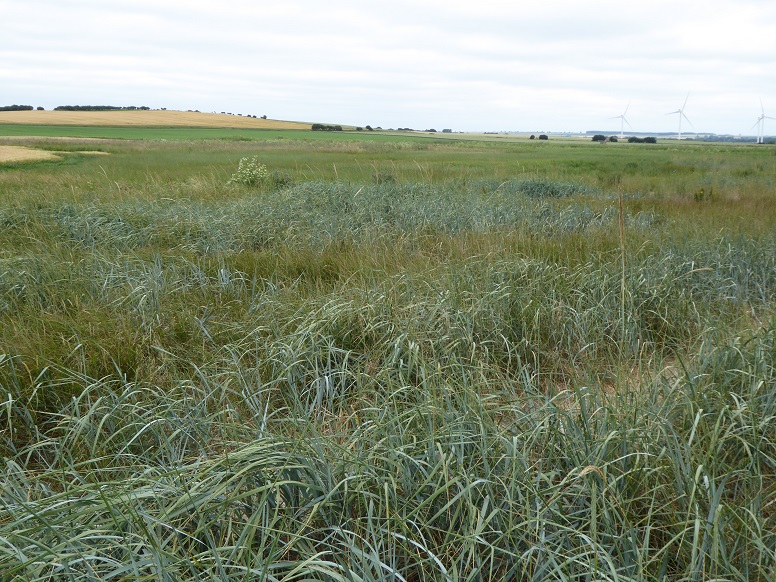 View inland from behind the cliff line across the uncultivated inner zone. Hamilton Hill, at upper left of picture, is a morainic feature [12 July 2018]. 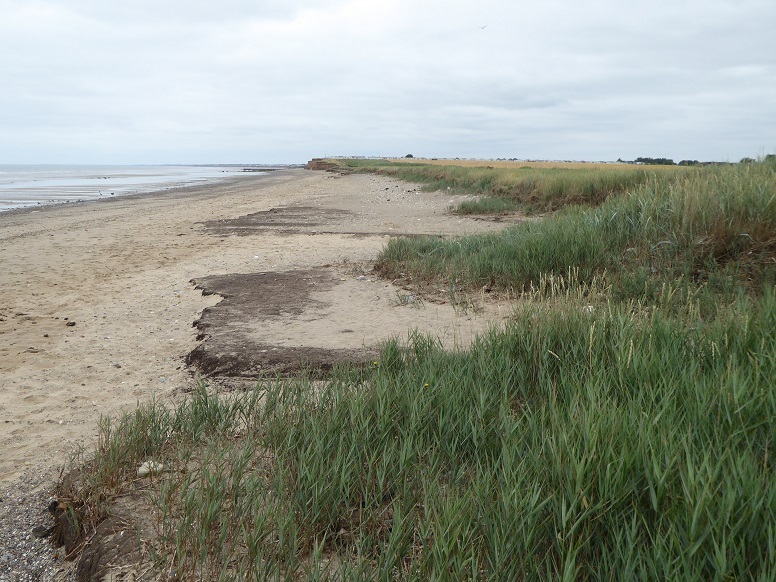 Pictures and text by Brian Williams unless otherwise stated.