This page is intended as an appendix to the sediment segmentation model and the migration chart.

Twice-yearly monitoring of cliff loss under the present system began in 2003, and information on beach contour levels is available from 2008. Although the following table spans eleven years, there is a break where a survey was missed because of poor weather. In effect, averages are calculated using data from ten years.

A coastal length of 52.77km is covered, this being undefended cliff from Bridlington south to the neck of the Spurn peninsula (monitoring profiles 8 to 122/123).

B: number of monitoring profiles at which cliff loss reported.

Averages for columns B and L are rounded.
Columns F to K relate to profiles counted in B.

high beach: beach level contour having a minimum of +2.5 metres OD extending for a few metres from the base of the cliff.

intermediate beach: beach level contour between +1.5 and +2.5 metres OD extending for a few metres from the base of the cliff.

low beach: beach level contour having a maximum of +1.5 metres OD extending for a few metres from the base of the cliff.

profile: the intersect of the cliff line by the monitoring line.

profile section: the lateral extension either side of a monitoring line, usually 500 metres in total. See data in detail (profiles).

The charts below are produced from the table. 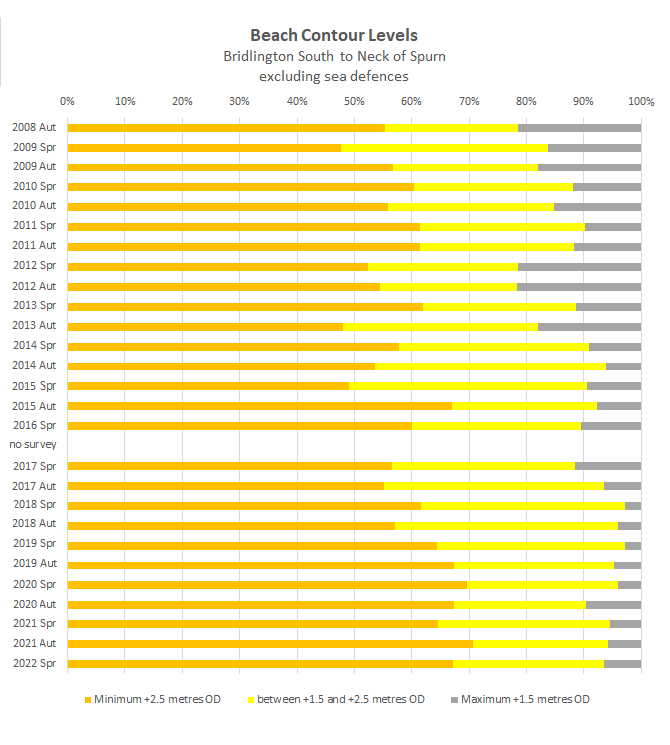 Results indicate that, on average, a little over half the coastal length displays a high, or full, upper beach. Such a beach offers some protection against wave energy. In quieter weather, high tide often does not reach the foot of the cliff. The migration chart illustrates distribution.

About two-thirds of cliff loss, whether expressed in terms of lateral extent or amount of landward recession, occurs where the beach is less than full.

Around one quarter of cliff loss is opposite a low beach, whereas low beach accounts for about one-eighth of coastal length.

The loss of cliff where beach is high would for possibly a greater part be a consequence of erosion lag. See direct and delayed erosion.

An example of beach level contours data, for April 2015, can be found at the East Riding of Yorkshire Coastal Explorer Interface (Layer List at toolbar right, then tick Beach Level Contours).

Locations of monitoring profiles may be viewed in satellite imagery as follows:

Brief descriptions of monitoring locations are supplied at data summary and coordinates (spreadsheet).

Prepared by Brian Williams in August 2020.