This page presents a model to describe the movement of beach sediment and associated cliff erosion along the glacially deposited coastline of the East Riding of Yorkshire, the greater section of which is known as the Holderness coast.

Material which forms the beach is called beach sediment, a broad term for sand of all grades, for shingle, pebbles, cobbles, and rocks. Sediment is gradually driven down the coast by the action of sea current and tides. It moves not as a whole but in segments, or bodies. Depletion of sediment as one body gives way to another allows waves to reach the base of the cliff more frequently and with greater energy, often creating erosion hotspots.

A main supply of sediment for the East Yorkshire coast enters at the ‘top’, arriving into Bridlington Bay having been brought around Flamborough Head by a sea current flowing north to south. Within the bay are sand banks known as the Smithic Sands, which act as a sediment depository. The bay is subject to a circulatory tidal regime.

Another supply is delivered by the very processes of erosion. The substance of the cliffs originates from the load of a glacier sequence that endured to full extent for four thousand years or so (see some basics). At each surface that the ice passed over in its distant journey, grains to rocks of every size would be picked up. Part of the glacial course included the sediment-layered exposed bed of the North Sea.

Nearly a third of eroded cliff material consists of sand and coarse particles. Stones and boulders, called erratics and found in abundance within the tills, are reduced eventually to finer grades once on the beach. The rest is mostly clay, becoming mud and soon washed out to sea.

Sediment spills from the southern end of Bridlington Bay, north of Barmston, where it enters the realm of longshore drift.

The term longshore drift is given to the action by which beach sediment is transported in the direction of the sea current when waves arrive at an angle to the shore. For detail, see the terminal groyne effect page.

Consequently, an impression may be had of an entire beach slowly working down the coastline as a single entity. In the East Yorkshire situation, this is not altogether the case. As well as longshore drift there is an additional disturbance to sediment. 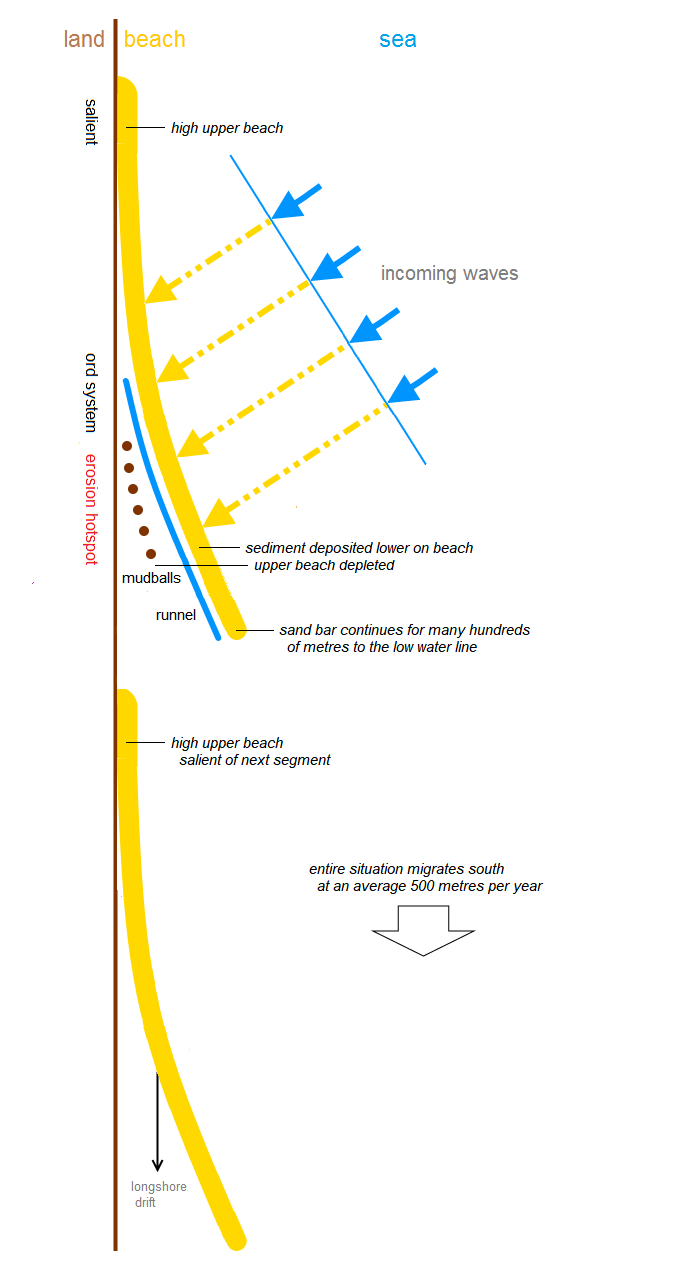 An incoming wave, arriving oblique to the shoreline, deposits sediment along the intertidal zone forming an arrangement that has a seaward tendency, or ‘pull’.

(For the sake of simplicity, the geometries of refraction, or reduction of a wave’s angle of approach as it enters shallow water, are not included in the above schematic figure.)

Subsequent waves, influenced by the configuration, add more sediment in a manner of positive feedback sometimes referred to as self-organising. A body of sediment builds, variously identifiable along its length as a bank, bar, brow, or ridge.

Although the sediment body pulls towards the sea, it does not continue into deeper water. Wherever such a feature comes to an end, waves are able to carry sediment higher up the beach, and the process begins again.

The beach therefore should not be thought of as a continuous longitudinal expanse but more in the light of segments, each hundreds of metres in length, moving in sequence.

At the northern end of a sediment segmentation body, sandy material is deposited at and near the base of the cliff, raising the level of upper beach to form a salient, usually covering a distance of many tens into hundreds of metres.

Salients offer some protection for the cliff against wave action. Quite often, a normal tide is prevented from reaching the cliff.

A salient diminishes as the sediment body pulls away southward to begin a long traverse of the lower beach to the low water line. Depletion of the upper beach cover increases exposure of the cliff base, and the potential for erosion becomes greater.

Previous researchers, notably Ada Pringle and Anne Scott, referred to the sites of reduced beach as ord systems, or ords.

The word ‘ord’ , spelt ‘hord’ in an 1824 text, may have passed into local dialect through Old English from Danish and relates to a pointed tip or end, though other origins are also suggested.

An ord system has characteristic elements. These include a sand bar or ridge at the lower beach, as described above, usually asymmetric in cross section, emerging from the salient.

Another element is the runnel, a parallel channel or trough immediately landward of the sediment body, retaining at least for a while water from the last high tide.

There is ordinarily a presence of mudballs, a sure indicator of active erosion.

The most depleted section of upper beach immediately to the south of a salient is regarded as the ord centre. Here, sediment cover is thin or possibly absent altogether from the surface of the clay platform that underlies the beach.

Fine material released from a newly eroded cliff or platform adds little near an ord centre but may well contribute to a downdrift configuration. 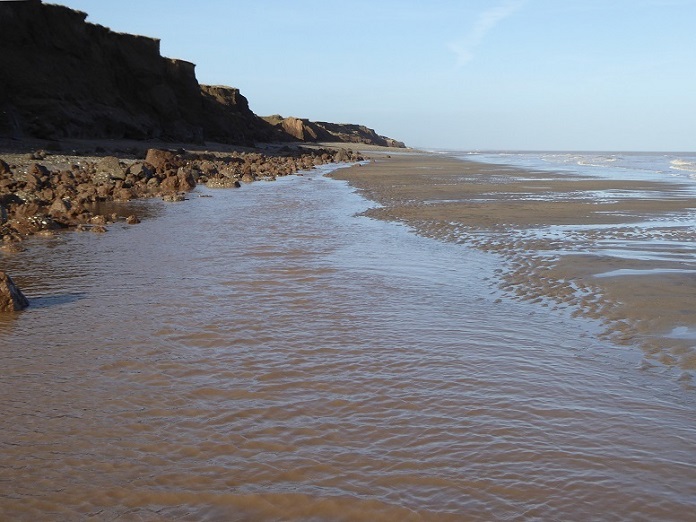 A sand bar (right) pulls seaward from a salient (centre distance, under the cliffs). Immediately behind the bar, a runnel (foreground) retains water from a receding tide. Landward (left) of the runnel is an erosion event, identified by thin beach and mudballs. The whole feature is sometimes described as an ord system [East Newton: 3 February 2017]. 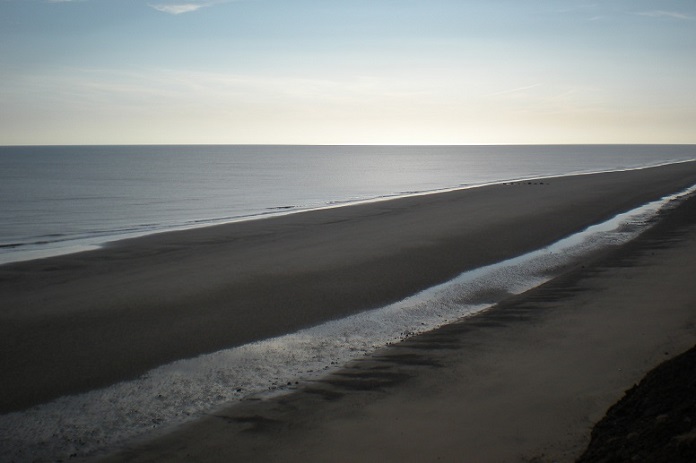 A sand bar and runnel at the middle section of a sediment segment [Tunstall: 24 September 2011]. 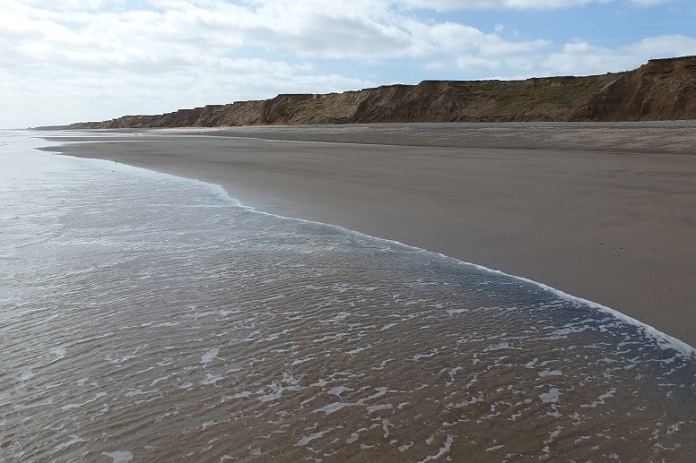 Waters of an incoming tide provide an outline for the southern end of a sediment segment. Beyond the sand bar, the lower beach is flooded. A partially drained runnel is also visible [Atwick: 23 April 2013]. 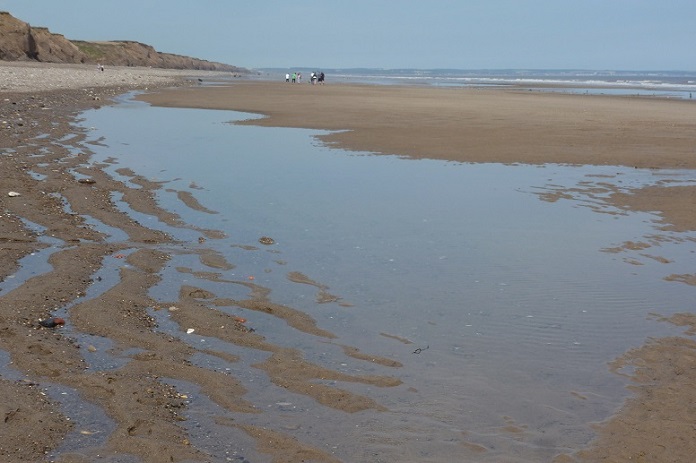 Beach visitors stroll along a sand bar in late spring. This is more seaward than the example in the first picture, and the erosion zone lies in the far distance. On tide turn, a runnel may fill very quickly for much of its length, leaving the sand bar – including anyone on it! – cut off from the rest of the beach [Atwick: 26 May 2013].

Below, a chart composed of nine consecutive cross-beach profiles represents a distance along the beach of four kilometres, from Cowden to Aldbrough, in units of 500 metres. The vertical scale is approximately twice that of the horizontal. 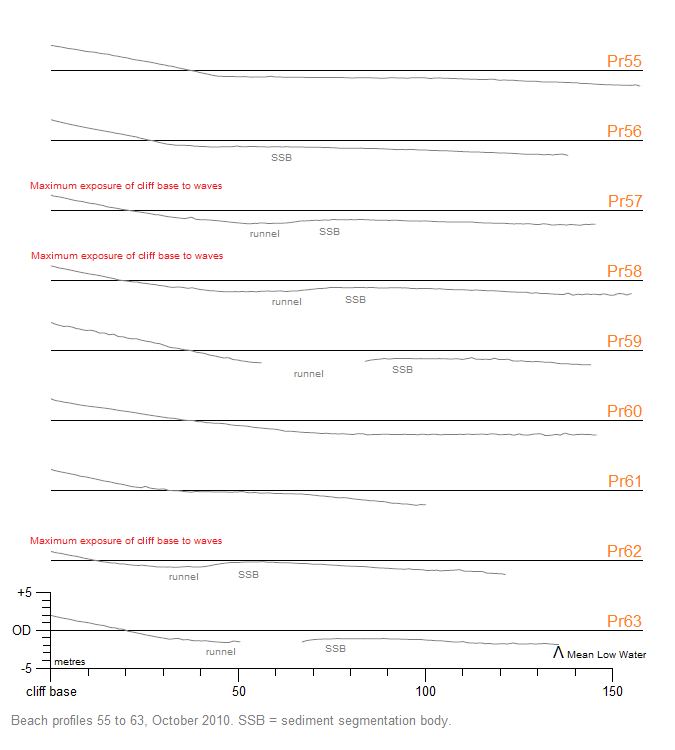 Pr55. The sequence starts with a salient (at left of image) providing a full upper beach and clear transition (the point where beach slope changes) and a wide lower beach.

Pr56. A proto-runnel appears, accompanied by a drop in upper beach level, signifying sediment depletion behind the main sediment mass.

Pr57, Pr58. Asymmetrical in section, the body of sediment pulls seaward. A fully formed runnel becomes wider, and the upper beach reduces to a local minimum.

Pr59. The runnel is at its deepest and contains water from the last high tide which interrupts the scan trace. However, sediment is deposited at the upper beach, increasing the level there.

The distance a sediment body extends along the beach is essentially determined by the prevailing wave approach angle (WAA). This is the angle an incoming wave makes with the shore and cliff, represented by θ (theta) in the diagram.

Wave approach angle is a product of sea current and tides, and of wind direction, though the wind is a highly variable driver.

Where cliff aligment changes, the wave approach angle will also change. The East Yorkshire coast takes the shape of a long letter ‘S’, occasionally referred to as sigmoid. Angles of wave approach are greater at the curvatures. An increase in the angle means a decrease in segment length. There is also a small deflection in the cliff line to the south of Mappleton.

Segment lengths can be calculated from wave approach angle data and placed in sediment zones. Accordingly, along the relatively straight section of coast between Mappleton and Withernsea, a typical length is about 3000 metres.

The early work on ords (see above) crucially included estimates of pace of movement or migration. Calculated from a number of surveys conducted between 1969 and 1983, particularly 1977 to 1983, average migration was put at 496 metres per year.

Variations in pace within a given stretch of coast are essentially determined by wave and wind conditions. During a quiet season there may be little or no discernible movement. Northerly storms tend to produce the most repositioning. In the aforementioned surveys, annual movements range from 5 to 775 metres.

It follows that estimates for the rate of ord movement can be applied to the sediment segments that define ords. Perusal of beach level data collected since 2008 would support the figures as a guide to the coast in general, while values decrease a little towards the northern and southern ends.

If an approximation of 500 metres a year is accepted, then sediment segmentation bodies and their associated ord systems migrating south along the East Yorkshire coast take well over a century to complete the journey. 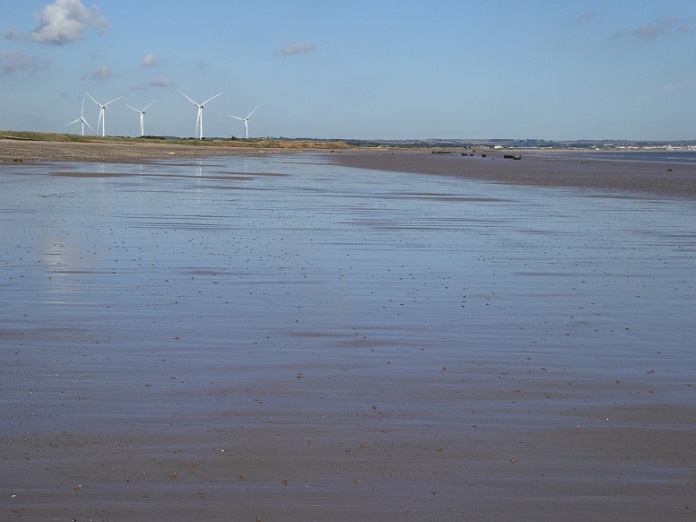 Opposite Barmston Low Grounds at the southern reach of Bridlington Bay, a sediment segment departs the ‘nursery’ for a journey down the coast that will take over a hundred years. The camera is aligned with a runnel in the making. Along the sand bar sits a line of concrete anti-tank blocks and other military defence remnants (see pillboxes) which serve to delineate the cliff position during the early 1940s [Barmston north, 22 September 2017].

Within the shoreline environment, sediment features are not always easy – or indeed every time possible – to identify with confidence. Forever changing, configurations of sediment will on occasion appear fragmented, incomplete, irregular, reformed, multiple, superimposed, or merged.

In the main, however, some evidence of segmentation should be available, perhaps with a clear example, at most locations.

Additional interpretation may be called for near a coastal defence installation, where the terminal groyne effect is dominant.

To summarise, a series of sediment segments migrate along the East Yorkshire coast, at an average pace in the order of 500 metres per year. There may be twenty or so such bodies at any one time, with more undergoing formation in the ‘nursery’ of Bridlington Bay, north of Barmston.

Where a segment lies close to the cliff, a sandy salient raises the level of the upper beach, providing a degree of protection from destructive wave energy.

Between salients, especially where the segment pulls away seaward from the cliff (in what is sometimes called an ord system), the upper beach is depleted of sediment cover, allowing waves greater access to the base of the cliff.

The result is a high probability of cliff erosion. As sediment shifts southward, the potential for significant cliff loss follows. Examples of tracking cliff loss migration from data tables appear in the hotspots page.

Since it is the loss of land at the cliff top which impacts on communities and businesses, emphasis tends to be placed on this aspect of coastal erosion rather than what is happening on the beach. See the data in detail page for a background to cliff loss measurement.

By combining data from regular monitoring of cliff recession and surveys of beach contour levels, a relationship between beach movement and cliff loss migration can be represented in graphic form. Too large to be included here, the chart and its appendices are available at the following links: