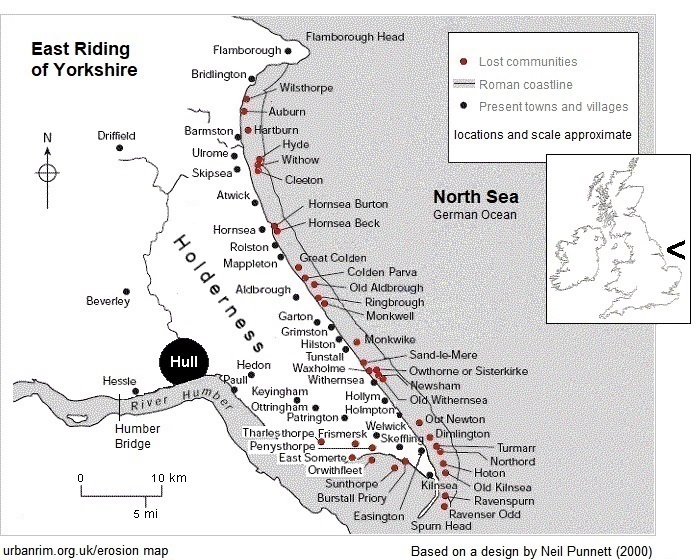 Names are obtained from documents beginning with the Domesday Survey, completed 1086. Within the records, variations in spelling are common.

As a matter of note, the ending ‘-sea’ for an existing place name was originally ‘-sey’, meaning mere, or lake. The style is preserved in Woodmansey, a village between Hull and Beverley. Holderness once contained a number of meres, all products of the ice age. Of any consequence, only Hornsea Mere remains.

The distance of the coastline in Roman times from that of today is sometimes put at around three-and-one-third miles, as calculated by Ernest Romney Matthews, a civil engineer, in 1905. Other estimates are more cautious – present rates of erosion would make the distance a little over two miles.

Loss of communities along the south Holderness edge of the Humber can be attributed to a series of estuarine inundations during the fourteenth century.


For the original erosion map, see:
Thomas Sheppard (1912), The Lost Towns of the Yorkshire Coast
(turn the pages to read the contents of the book)
pdf

East Riding of Yorkshire Council displays a version at:
Coastal Explorer
(if your browser does not take you to the map, scroll to page 4)

Other renderings can be found online.

Sheppard might seem to use the term ‘towns’ in his title rather loosely. Most places shown on the map in the frontispiece of the book would, especially in times of pre-industrial populations, be no more than villages, hamlets or perhaps extended granges. However, associated lands could cover some area. These would constitute the ‘townships’ of the Enclosure Acts.

Also, depicted positions should be regarded as best estimates. Sheppard locates Southorpe out at sea to the east of present-day Hornsea whereas the site of the deserted medieval village (DMV) of Southorpe is generally accepted as being on the south side of Hornsea Mere, at about one-and-half kilometres inland of the current cliff line. The acknowledged site of Northorpe is inland, too. Neither name appears on the above erosion map.

The following two links open directly in NLS Explore where continuous OS six-inch to the mile (1:10,560) maps are aligned with recent aerial imagery. Starting location is Seaside Road, Aldbrough, about the halfway point of the coast.